Few bands are as revered as Swedish doom metal outfit Candlemass. Their seminal debut ‘Epicus Doomicus Metallicus’ is rightly hailed as a masterpiece, one of the founding slabs of doom metal and it earned the band the title ‘Godfathers of Doom’. Ironically, the singer on that album was Johan Längquist, who never actually joined the band, merely contributing vocals as a session musician. Shortly afterwards, Candlemass appointed Messiah Marcolin who sang on the following releases, including ‘Nightfall’, another legendary album. In 2018, the band announced that Längquist had joined the band full-time, replacing Mats Levén who had been their singer for most of the decade. The resulting album, ‘The Door to Doom’ was one of the most impressive releases of 2019. The band recently released ‘The Pendulum’ EP, and I caught up with Johan at his home in Jocose Bay just outside of Stockholm.

The Razor’s Edge: How are things with you at the moment in these strange times?

Johan: I’m working as usual at my ordinary job, but it is empty everywhere and if you sneeze when at work, they send you home!

The Razor’s Edge: I’m lucky enough to work from home but the lock down makes everything a bit strange. Not being able to watch to music is a challenge.

Johan: We are not there yet but things will change.

The Razor’s Edge: It’s a great honour for me to speak to you and I apologise that a lot of my questions you’ll have been asked hundreds of times before!

Johan: No problem. You don’t know the questions I’ve been asked in the past.

The Razor’s Edge: Great. If we can start by going back to 1986 (for the millionth time!) and you sang on ‘Epicus’ as a session musician. How did that come about?

Johan: Yeah, they were looking for a singer and they had a drummer in the band at that time living in Jocose Bay and he asked me if I would be interested in doing ‘Epicus’ with them and later on I met them and told them that I was very involved in my own band and that whilst it would be great to sing on the album I had to also continue to work on my own project. You decide if you think that is okay. We talked about it and obviously you can’t leave your own project. They were happy for me to do the vocals anyway.

The Razor’s Edge: What was your background before you sang on ‘Epicus’? How did you become a singer?

Johan: The usual thing that happens when you start a band, someone says, “I’ll take the drums”, “I’ll take the guitar” and “I’ll take the bass” and there was nothing left for me! So, okay, I can do the vocals. Some instruments have more status than vocals when you are very young. You grow up and then you realise that everyone is needed.

The Razor’s Edge: Looking back on ‘Epicus’, which has become something of a classic album, what are your memories of it because at the time it wasn’t very successful?

Johan: No, a lot of people thought that it was very uncommon, they’d never heard anything like it before and maybe that record was a bit before its time at the time. Some people were even laughing when they heard the demos.

The Razor’s Edge: Did you ever sing live with the band when it was released?

Johan: I just went to the studio for two or three days and then I was back to my own band again!

The Razor’s Edge: I think the band approached you a couple of times to re-join but you didn’t. You said when you did join in 2018 that everything was ‘perfect’. What did you mean by that?

Johan: You know, when we recorded ‘Epicus’, I already had family and a child. So, in the end it was four kids and now seven grandchildren and they are all now grown up and I can do what I want so that’s the perfect timing. When I was 24, 25, people were asking “could you join us and tour” and of course I needed to earn to pay the bills. I couldn’t leave the family at that time.

The Razor’s Edge: It is still a challenge for bands to be able to make money these days.

Johan: Yes, it is a hard business; it has always been.

The Razor’s Edge: How did the return happen? I know you played with Marcus Jidell (Avatarium and Candlemass producer)

Johan: Yes, Marcus is a friend of mine and I’ve done a few things with friends, but I haven’t done anything with my own music. I’ve written songs with other people but it was through Marcus.

The Razor’s Edge: I know that you’d performed ‘Epicus’ with the band on several occasions [e.g. Roadburn 2011] but when you started doing live shows with them in 2018/19 you then had to cover other material (mainly from ‘Nightfall’ and ‘’Ancient Dreams’). Messiah Marcolin sings in a different manner to you. How much of a challenge was it to sing those songs?

Johan: Yeah. I really like the songs on ‘Nightfall’, they are great songs. I am not Messiah; he is a higher pitched singer, so I had to push my voice to get to there but I’m comfortable pushing my throat! I had to find my own way and I don’t want to copy others, so I managed to sort my own way of singing them which I was comfortable with. 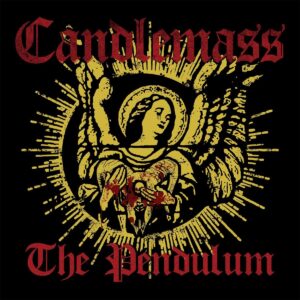 The Razor’s Edge: The band has just released ‘The Pendulum’ E.P. A collection of unheard demos from ‘The Door to Doom’ sessions. How did it come about?

The Razor’s Edge: You’ve recorded ‘Porcelain Skull’ which Avatarium put out on ‘The Fire I Long For’ last year. It’s a track written by Leif. Was it an interesting song to sing?

Johan: I haven’t heard that yet, [the Avatarium version] but I had to push my voice hard to reach the high notes in that song [unsurprising as Jennie-Ann Smith has a naturally higher range] but I like it, it’s a lot of fun. It’s always about having a good time and enjoying yourself. I’m not afraid to see how I manage to do some of the songs live.

The Razor’s Edge: It’s been a year or so since ‘The Door to Doom’ was released; a fantastic return and the first Candlemass album since 2012. How has the reaction to your return and the album been?

Johan: You need to be grounded. You can never expect anything, but we felt it was a good record, but we couldn’t tell how others would think about it. Almost everyone seems to have liked the album, critics and those who write about it in the magazines. No negative reviews so far.

The Razor’s Edge: A lot has changed in recording processes and techniques since you sang on ‘Epicus’. Were there any shocks in terms of the process?

Johan: No, no, I know Marcus and he is an excellent musician and his ears are made for music, it’s so easy to do the recordings with him and no problems The difference between 1986 and now is that you don’t have to do the whole song in one go, you can do a bridge and then stop. It’s a more rational approach and I like it.

The Razor’s Edge: Your style is easily identifiable. How have you taken care of your voice over the years.

Johan: Believe it or not I don’t do anything. I have never done anything with my voice. I just sing the songs I write. Maybe that’s not good! And I’m not that interested in lessons. If I sing and I feel comfortable that’s enough for me.

The Razor’s Edge: And what next for Candlemass? I’m assuming you would have had live dates arranged.

Johan: Yeah, we are working on doing something, maybe a live stream, just to do something. I’m not sure about when. Our US tour has been put back for a year. Everything is very strange.

#ICYMI - Our review of Candlemass' E.P. 'Pendulum' can be found here.