Six studio albums under their belts since their formation in 2011, Ohio doom/atmospheric metal unit Close The Hatch’s latest album 'Modern Witchcraft' is a bleak release and one strange to be reviewing on a sunny afternoon. Huge swathes of riffs are layered with haunting melodies and dark themes. The album opens with the suffocating 'Death of Wolves', a song that leads into 30 minutes of punishingly heavy riffing, harrowing, echoing guitar work and forays into the post doom realm. 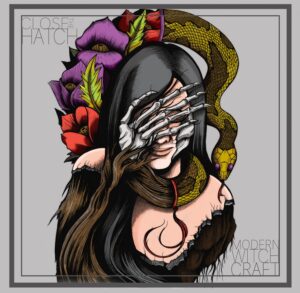 Repetitive hooks that snag and snare are essential, the power of the band conjured in the sheer atmosphere that they create rather than the pace or power. The psychedelic feel of 'Hedge Rider', with its 1970’s feel reverberates deep whilst the intensity of the title track drips with melancholic disaster.

Close the Hatch follow the footsteps of post and doom metal heavyweights like Neurosis and Isis yet strike their own style. Their music blends effortlessly, casting spells with an ethereal output that focus on shorter less laboured songs than other bands often struggle with. What sets Close the Hatch apart from many of their peers is their ability to emote with a conviction that’s distinctly their own. The eerie, haunting duo of Persona Non Grata and Exit Anxiety that drag the album over the finish line are perfect examples of this. Close the Hatch is Shaun O. – guitar; Steve B. – vocals, guitars; Shaun H. – drums and Josh G. – bass

'Modern Witchcraft' is released on May 22nd via Red Moth.