I suppose it’s worth stating from the start that this album won’t float everyone’s boat. However, if you like doom sludge in the style of Monolord or Windhand then this should be an album you may wish to have a bite on. 57 minutes of crashing Sabbath style riffs, gloom driven vocals and more fuzz than a fat man’s navel, ‘Hazy Rite’s is a crushingly heavy piece of work.

Formed in 2016, Witchfinder hail from France and sign about Satan, Cannabis, black magic and witches. Their debut eponymous release arrived in 2017 and now with their sophomore album the band have put their experience of many support slots with bands including Red Fang, Corrosion Of Conformity, Dopethrone, Ufomammut, Conan, Monolord, Kadavar, The Flying Eyes, Hangman's Chair and The Necromancers to good use. 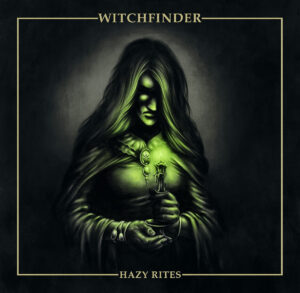 Like many bands of this genre, there is limited variation in the tracks and the delivery. Crank the volume up, pound the rhythm section and down tune the guitar. Riff for all you are worth but at a slow pace and ensure that the listener has enough paracetamol to help with the inevitable head pain that comes from being hit over the head with such heaviness. The album is laden with doom, with four massive slabs in ‘Satan’s Haze’, ‘Covendoom’, ‘Sorry’ and the closing ‘L’Instant’, three of which clock at nearly ten minutes or above.

There is a good slice of psychedelia which threads throughout the songs and whilst the band don’t’ play anything that is dissimilar to their peers, the sound that the trio make certainly isn’t anything to turn away from. In fact, the whole album is a fuzzy, distorted trip which transports the listener into a tripping journey from the opening bars of ‘Ouija’. If you want your music delivered with the pace and weight of an elephant herd, this may be an album to explore.

Witchfinder are Clement Mosterfari (bass and vocals), Thomas Eghtrs (drums) and guitarist Stanislas Franczak. The album is out on 5th June via Mars Red Sound.