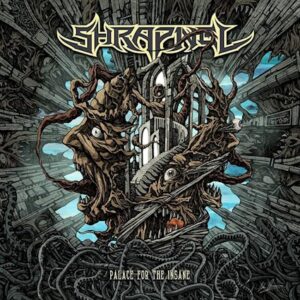 It could have been so different, having a line up change with key members from a relatively stable line up leave the band before the recording of this album, Shrapnel have recovered and clutched victory from the jaws of defeat. During the course of this album they cover a plethora of styles. Fast? Sure, 'Infernal Choir' and 'The Mace'. Slow? No sooner said than done. We’ve got 'Salt The Earth' and 'Violent Now, Forever.' Dark and brooding? Easy.  'Begin Again'. Black Metal, no problem, have a listen to 'Bury Me Alive'. How about if Motorhead discovered blast beats? They’ve got that covered, 'Turn Off The Lights'.

Every now and again a band hit a sweet spot. The planets align and a song is produced that sends ripples throughout a bands career. Shrapnel have had just such a moment in the shape of 'Might of Cygnus'. Shrapnel now have their "Holy Wars"; they have their "Master of Puppets". It’s an enthralling six minutes and forty seconds. Begins with an intro to rival Metallica’s 'Blackened'. Then it kicks in with some brutal riffs that build up to a chorus that is laced with delicious hooks. The riffs are repeated and the guitar work is elaborated on each pass. As Brian Clough might have said, “it’s a beautiful song that is played… beautifully."

I will end this review as I started it, with a big statement. 'Might of Cygnus' is the BEST SONG IN METAL THIS YEAR!  If you only buy one album this year, if you only listen to one song, make sure it's Shrapnel.

ICYMI - Check out the time Shrapnel got shipwrecked on Devil's Island!