Kick off your New Year with a frantic slice of old school death metal courtesy of Frozen Soul and their debut full-length ‘Crypt of Ice’. The Texan outfit provide 39 minutes of skull crushing, driving riffage that hangs its coat firmly on the same hanger as Obituary, Grave and the mighty Bolt Thrower. Indeed, the influence of the Coventry legends is strong throughout this powerful and explosive release.

It’s no copycat release though and these cats are no slouches when it comes to laying down the brutal steamrollering assault. Formed in 2018 by frontman Chad Green, who is no green behind the ears metaller. A former drummer in hardcore turned death metal outfit End Times, Green now lays down the guttural growling vocals with aplomb. Having tweaked the line-up, Frozen Soul now comprises guitarist Michael Munday, bassist Samantha Mobley, drummer Matt Dennard and guitarist Chris Bonner. 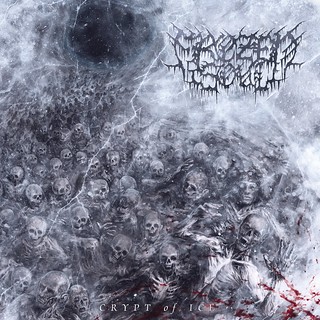 Opening with the title track, it’s clear that this album is about as subtle as a pair of copulating elephants. Instead, Frozen Soul picks up the pace from the opening bars, foot on the accelerator and ploughing down all in their wake. It’s a punishing, driving record, with immense power surging through each song. The gentle piano interlude that starts ‘Hand of Vengeance’ is a mere distraction before the band open the riff locker.

Described by Green as like the march of the Night King in Game of Thrones, you can see what he means. Unstoppable songs that exude an enormity that is almost overwhelming, the icy grip of tracks such as ‘Wraith of Death’, with its demonic soundtrack, or the jagged and visceral tones of ‘Merciless’ leave your defences with open gaps on the flanks.

What follows is a relentless barrage which marches forward. The almost hardcore flavour of ‘Beat to Dust’ and the enormous conclusion of ‘Gravedigger’ demonstrate a variation in style and themes which is welcome. The latter is a crushing, doom-soaked piece, vividly contrasting with the pulsing pace of ‘Beat to Dust’.

It’s a crushing battery, a cranial assault and a fine way to kick out the cobwebs and remnants of 2020. Grab a slice of Frozen Soul and enjoy the pulverising ride.