The battlefield of the New Wave of British Heavy Metal is littered with tales of hard luck, poor management, line up changes and bad decisions. The explosion that spewed forth band after band in the 1980s saw very few bands crawl their way out to even a modicum of success. For every Saxon there are a thousand bands who died on their feet. Many more released one blisteringly good album and then got lost. Whilst the phrase NWOBHM was conjured up by music journalists in a lazy way of sweeping up a growing movement in one badge, there was no denying that it was an exciting time to be around and interested in metal.

One band that needs inclusion when talking about classic albums is Tokyo Blade. Formed in Wiltshire in the late 1970s, the band went through several names before settling on Tokyo Blade. Their self-titled debut album generated interest, but after losing vocalist Alan Marsh it was ‘Night of the Blade’ which elevated the band to their peak. ‘Night of the Blade’ saw the band’s profile rise with European tours supporting the likes of Mama’s Boys, Blue Öyster Cult and Scorpions, their own headline shows to 2-3000 capacity venues and slots at festivals such as Aardshock alongside Metallica and Venom. The band disbanded after 1985’s ‘Black Hearts & Jaded Spades’ album before guitarist Andy Boulton continued the band for a few more years with some releases that are best forgotten. In 2009, the lure proved too much and with trusty comrades Steve Pierce (drums), Andy Wrighton (bass), John Wiggins (guitar) and Nicolaj Ruhnov (vocals) Tokyo Blade delivered a fine release in the shape of ‘Thousand Men Strong’ in 2011. In 2017, Alan Marsh returned to the fold, completing the Mark II line-up once more and in’ Unbroken’ the band demonstrated that far from being a bloated corpse floating in the midst of the resurgent NWOBHM flotsam, Tokyo Blade were a lean, mean machine ready to join the fight once more. 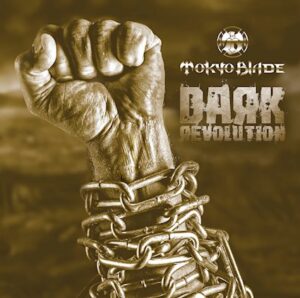 The good news here and part of the reason for my lengthy introduction, is that Tokyo Blade have now produced the finest moment of their career.’ Dark Revolution’ is likely to be the NWOBHM album of 2020 and matches the brilliant ‘Coffin Train’ by Diamond Head that was the equivalent record last year. At 57 minutes in length, ‘Dark Revolution’ could have been stuffed full of filler but that is not the case. ‘Story of a Nobody’ kicks things off, a fierce riff indicating that we are very much seeing the heavy side of the band. Marsh’s vocals soar, solid and confident. Ample melody surges through the track, but the riffs remain, the duel guitars of Boulton and Wiggins tightly knitted. A searing solo rage over the track which remains rock solid thanks to the engine room of Pierce and Wrighton. ‘Burning Rain’ follows, slightly more mellow but with a steel that maintains the momentum from the opening track.

As you work your way through this record, you ae waiting for the inevitable weak track to arrive that disappoints. It doesn’t happen. ‘The Fastest Gun in Town’, ‘Perfect Enemy’ with its confident swagger and the pounding title track with its Accept style riffing and Motley Crüe sleazy feel are all perfect examples of quality heavy metal. Not any sub-genre, this is true, standard, classic heavy metal played by five musicians with a combined love of music. It’s fast enough to appeal to those who like it with pace, ample melody and a solid, powerful feel that doesn’t fade at any time. This is an album that is going the distance. The pulsing drive of Lights of Soho and the chunky riffage of closing song, ‘Voices of the Damned’, surely an anthem for our time, ensure that Dark Revolution finishes with as much energy as it started with. I seriously hope this album gets the plaudits it deserves. It’s a muscular effort and one well worth checking out.

‘Dark Revolution’ is released on 15th May via Dissonance Productions.