In just a couple of weeks time Swedish death metal outfit Vampire release their third full length album 'Rex'. They are an interesting outfit, classified as death metal but not fitting inside the genre's templated ideals; playing under unique stage names and melding different influences into a brand of music like no other. Tim caught up with guitarist 'Black Sting' in the run up to the albums release.

Black String: Well I am fine, having a day off today. We are between public holidays in Sweden. So yes I'm fine I was watching a live stream the other day and started watching it again today.

The Razor’s Edge: How are you guys coping with coronavirus?

Black String: Oh, well it hasn't affected us that much because we didn't have any live shows planned when the virus broke out and now it's impossible to have any. [laughs] We were thinking of having some kind of meet and greet thing for the release date of the album, but with all the restrictions it's a little difficult to manage. Of course it's been suggested we broadcast some sort of live stream from our rehearsal room, so we'll try to do that. I think we'll record it next week and broadcast it on the release date.

The Razor’s Edge: Is that an idea that's come down from the record company or something you guys have come up with to promote the album?

Black String: Yeah it is, if it wasn't for the coronavirus no one would have come up with that sort of idea. A live stream like this can be watched by anyone all over the earth so its kind of cool.

The Razor’s Edge: A lot of bands are doing live streams at the moment, when all this is over do you think they will become more of a normal thing to do?

Black String: No I don't think so. It depends how the world is shaping up after all of this. Flights, maybe the price will be doubled or tripled, who knows. It will be harder for bands to go on tour in that way, of course bands can always tour by bus and all that. But I think still most bands will earn more money with real live shows than they do with live streams. This is just some kind of way to sell a couple of shirts and thats all. There's no money to be made in it right now.

The Razor’s Edge: It’s a couple of weeks now until ‘Rex’ comes out, have you approached this album any differently to your previous two?

Black String: I had a little bit of a more symphonic approach to some of the composing. I wasn't really afraid of incorporating some really melodic stuff which we hadn't really been doing before. There are a lot of harmonies on this album from like early heavy metal and perhaps Metallica, Maiden and so on. I was a bit more open minded this time.

The Razor’s Edge: You’re described as death metal, but listening to ‘Rex’ you offer so much more. You mentioned Maiden and early Metallica as influences. There’s certainly a thrash element to your sound.

Black String: Yeah I think the only thing that connects us with death metal is the vocal style and perhaps the lyrics. I think if you just listen to the music we are far more like old school oriented, from music before death metal really.

The Razor’s Edge: Would you say that sound you’ve got makes you stand out from the crowd in the death metal genre?

Black String: I think that we try to offer something broader than just death metal, there are lots of great death metal bands but we don't try to compete with all these technically great or advanced death metal musicians. We try to offer the song writing, catchiness and fist in the area anthems.

The Razor’s Edge:  I certainly get that listening to the album. ‘Rex’ is certainly a progression from your previous albums. How do you think your sound has developed over the last nine years?

Black String: It's nine years already? I tend to forget that. The last five years we haven't been rehearsing very regularly but still we have become tighter as a band. I think our vision is a lot clearer than  when we started. We have developed a sound that we are comfortable with, there are no real uncertainties when we compose music these days. We know what suits Vampire and we know what wouldn't suit. We have developed a concept that we can still push a bit further don't feel we have to do.

The Razor’s Edge: When writing an album, where do you take your inspiration from?

Black String: I tend to have some really old influences in my head that I've had going on for years. There are some great old demo tapes or records that I fell "oh this must be done again somehow". Not blatantly copied you know, but I want to do a song that is similar to this and this and this. So Sometimes I have these influences in mind when I write riffs or accidentally some of my writing can be compared to old influences but sometimes things just come up by themselves. It's kind of a mixture.

The Razor’s Edge: When an album comes out, do you look out for what the critics have to say? How do you react to both the good and bad reviews?

Black String: I like reading the reactions and when our first album came out I think back then I was a bit more offending if someone was saying "this is not so great" but suddenly I started agreeing with the critics "sure we can do better than this". It's almost like when you got your grades from your teachers. Sometimes things can be done better. Sometimes of course I don't agree but it's good to read the negatives as well.

The Razor’s Edge: So you use the reviews as a way to grow and develop further as a band?

Black String: Definitely. For the last album the reviews were mostly really good so there wasn't much to learn. But for the first album the critics were varied. We were an underground that were suddenly on a major label so we weren't really used to the exposure and the opinions were more varied.

The Razor’s Edge: The artwork for ‘Rex’ by Mitchell Nolte is quite something. What was the brief you gave Mitchell for the work?

Black String: Actually the cover was already done when we got in touch with him. We realised our last album cover was done in the same way, it was already finished when we approached the artist. I think it's for us become more suitable. If there is a great piece of work that's unused it's really comfortable to use it as it is rather than coming up with directives that can be mis-interpreted so this was the perfect choice for us.

The Razor’s Edge: So did you pick the artwork out of his catalogue or did he give it to you?

Black String: You are right, we picked it out of his portfolio.

The Razor’s Edge: What next for Vampire?

Black String: It's hard to tell, after the previous album we started with new material about a year after its release. Surrounding a release theres always too much to do rather than focusing on new songs. The same thing right now, we have singles and videos coming out today, there's administrative work to do.

The next album will sound a bit different, the last stuff I was writing was in the Black Sabbath sort of vein, I think Vampire will not sound like Black Sabbath but we might slow down the tempo a little bit and do a more doomy album.

The Razor’s Edge: Before I go, I’ve got ask, each band member has some very unique names, what is the story there?

Black String: The story goes that when we started the band we wanted it to appear like a completely new band, unknown without any connections to the previous bands of the band members. So we used the stage names like the old classic bands... Venom, Bathory and so on. We had the idea that the stage names should be connected to the instruments. Our singer, Hand of Doom, used to be the drummer back then, so he chose Hand of Doom from the Black Sabbath song.

Command, he's the bassist, but he's a control freak so he likes to be in command. And Black Strong... well thats extremely stupid, theres a band from the Czech Republic that I like a lot and their drummer had the stage name 'Black Drum' so I figured I'd use that something like that so i became Black String. Thats how it started.

Check back in the near future for our full review of 'Rex' which get's its release on June 19th via Century Media. 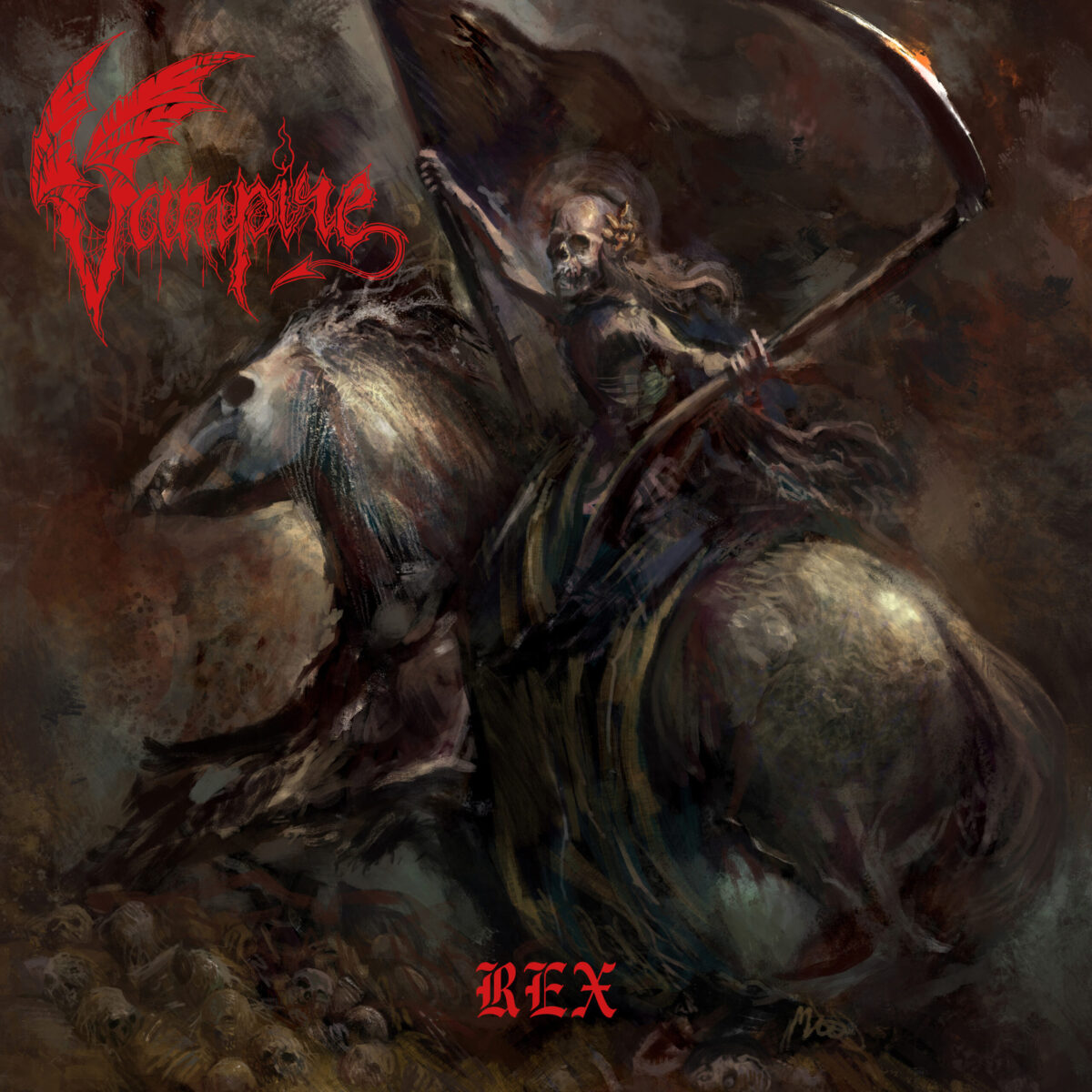