After 20 albums and 40 years in the metal business, you have to give a lot of respect to Chris Boltendahl and crew. They have been playing this type of metal with a smile on their faces when it could have been easier to bend their style or stop altogether. 'Fields of Blood' marks their ruby anniversary and is the concluding chapter in a three-part trilogy depicting “The Highland Story”. The German power metallers really go to town on the concept too. It’s so drenched with Celtic overtones it even bought a tear to Mel Gibson’s glass eye. 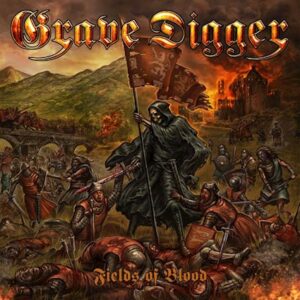 The opening intro is testament to that fact. It’s all bagpipes and power chords, you can imagine this ringing out over a recent deserted battlefield with the mist hanging in the air. The majority of the songs on this album follow a very set pattern with a few deviances and a few songs with a slightly different slant. Seven of the twelve songs are power metal to the bone, all double bass during the verse and chanting choruses that get the hairs up on the back of your neck. With two instrumentals (intro and outro) a battle ballad in the form of a 'Thousand Tears' which feature the haunting vocal of Noora from Battle Beast, an epic 10-minute song which features a Beatles-esque segment and a drum and bass solo to the usual formula and, completely at random, a sleazy hair metal song in the shape of 'Barbarian' its as mixed a bag as power metal gets.

The standard songs each have a little something about each one, 'All for the Kingdom' is fast as hell, 'Heart of Scotland' is slower, 'Lions of the Sea' is in between. 'My Final Fight' is more folky, 'Gathering of the Clans' has a bagpipe break in it and William Wallace makes an appearance in 'Freedom'. But all have that chanting chorus that’s reminiscent of a battle speech, call to arms.

Iron Maiden covered this subject in one song, Grave Digger have covered the same ground in three albums. What does that tell us about Grave Digger? (what does that tell us about Maiden?) You definitely get your money’s worth with this release. It does become a bit predictable by the second half and even when they stray from their own path, it’s never that far. Even during the epic closer, it’s an extended idea that could have been done in five minutes. If you love the genre, this won’t disappoint, if you don’t, this may pass you by.

'Fields of Blood' is released via Napalm Records on May 29th.