Are you aware of Blind River? No? Well, now is the time to change that situation and immerse yourself into the second album by the Guildford based five-piece who have been tearing shit up across the country for the past couple of years. Two storming appearances at Bloodstock in recent years merely provided evidence for those of us who already know – Blind River are one of the best hard rock bands in the UK.

‘Made of Dirt’ is 43 minutes of dirty, superbly played hard rock which continues the explosive feel of their 2018 debut album. The feel-good stomping sound they established on that debut is still very much in evidence on ‘Made of Dirt’, but Blind River have also expanded their repertoire and style slightly. As well as the raucous riot of the title track and the opening boot stomp of ‘Waste of Life’, the band have drawn deep on their vast experience and influences to make ‘Made of Dirt’ an even more enjoyable listen. The slow groove of ‘Acid Tongue’, the smouldering ‘Slow Begins the Sickness’ with it’s Southern edged guitar work and the Soundgarden vibe of ‘Burn the Sun’ all add to the quality on offer here. 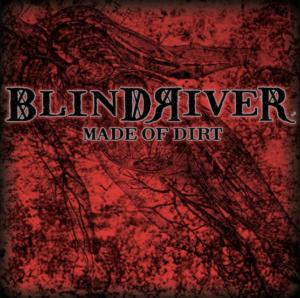 Central to the band’s sound is Harry Armstrong. His rasping vocals are one of the main weapons in the Blind River arsenal and his performance throughout the album are a major highlight. Not only is he a genuinely lovely guy, he can’t half sing. Whether it be reaching to the depth of the emotions on ‘Burn The Sky’, whipping up a storm on ‘Made of Dirt’ or taking a more melancholic approach on ‘Psycho Sapien’, Armstrong’s vocals are superb. Of course, the sum of the parts is always greater and in Blind River we have not just Armstrong but four other special musicians. With a past that includes time with Pig Iron, Godsized and the Earls of Mars, it’s unsurprising that quality is the key word here. Guitarists Dan Edwards and Chris Charles know their trade, doing the simple things solidly and the complicated things easily. Witness the interplay on the bluesy ‘Gone’ for just one example. In the engine room Will Hughes and Andrew Esson hold the foundations rock solid, providing the platform for Blind River’s perfect blend of gritty hard rock.

‘Made of ‘Dirt’ has been long anticipated, and to say it ticks all the boxes is an understatement. Plenty of variation, masterfully delivered and all done with a swagger and a smile. Blind River are a band that make you want to jump up and down, slug down a beer or two and generally lose your inhibitions to. This album will hopefully propel them one step closer to the recognition they deserve. No bullshit. This is simply hard rock at its best.