So, this was an album I picked up on pretty hastily. I was watching a BangerTV video regarding September’s releases and this record was featured; I instantly knew I had to check if out pending on its availability. Thankfully, here we are. Cruz are one of the growing number of extreme metal bands that have been pouring out of Spain throughout the last few years, in this case the band hail out from Catalonia. Their first Demo released in 2015 yet just a year later, Cruz unveiled their debut full length titled Culto Abismal which they released independently. However, a full six years on from that album, including new vocal frontman, Narcis Boter Jaume, and their previous vocalist, Michele Stocco, stepping down to the position of guitarist, we finally have a new full length by the band and releasing through Nuclear Winter Records no less. A record label deal also points towards towards future releases by the band as well which is always a good thing in my books, especially when your first few releases were done so through independent means. Time to see what Cruz, and Confines De La Cordura, are made of.

Introduction tracks can sometimes be a bit or miss with many people and I’m one of them, often you’d prefer a band to get right into the action. However, I’m willing to undergo the atmospheric immersion that Cruz showcase. Opening their record with a slow yet sinister piano piece is a great way to suggest to fans that this won’t be an easy ride. What’s more, it isn’t 30 or 90 seconds; it’s a legitimately included track that spans almost three minutes. In that time the piano solo evolves to include haunting synthesisers that ebb again and again like a tide continuously coming in. We soon see the synths brought in with greater effect as they underlay the record with the vast sense of doom. It’s a strong opening for the band where not a single strum of the guitar has been made as of yet, therefore once the band get going truly you aren’t taken so aback by the potential ferocity of their assault; the band have otherwise primed you for it.

What I wasn’t expecting however was how dirty and raw this record would end up sounding like. This is one fast record. Fast not necessarily in the songwriting, but the sheer speed at which the guitar work is moving at. The thing is that it’s difficult to determine whether the guitar work really is that fast, or that the production it’s been given has resulted in a riff assault that comes off as this fast. Cruz remind me of what Dismember would potentially sound like if they went even faster, it’s that ripping nightmare that the band hurl us into that we can’t get enough of. Whatever the case is, I’m not complaining, even as the band break up their riffs into chunkier and blockier segments the guitar work mitigates this absolutely ravenous fervour. Reminiscent of a beast, rabid, let loose from its chain, the riffs are downright destructive. It’s the overarching reason why this album seems to possess as much bite as it does; it’s a consuming and empowering soundscape that dominates and assumes much of the album’s strength. Not an ounce of the guitar tone has been refined, it’s a very natural and ruthless performance that’ll leave you breathless but owing to the nightmare they throw you in, you’ll be immediately begging for more. Personally, it’s the most savage guitar sound I’ve encountered since Of Feather And Bone’s last album. 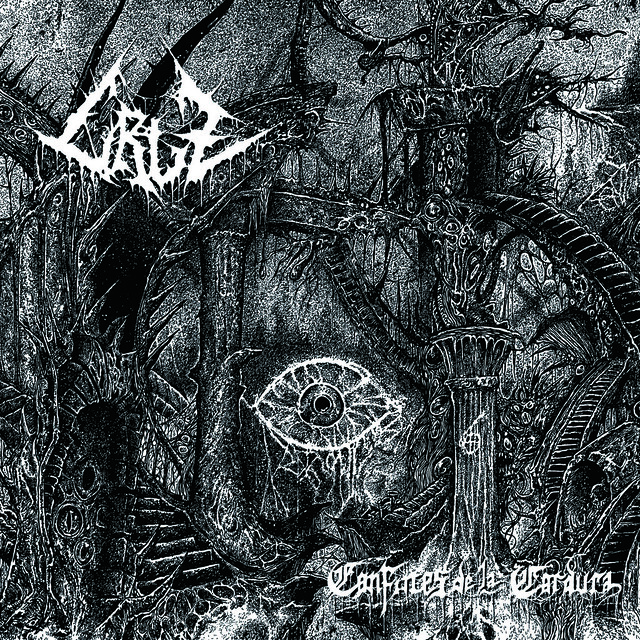 Other than that, I liked how the drums have been produced and then mixed. You’ve got the guitar work being the all-encompassing force they clearly are, and it’s evident this was something the band wanted to ensure made its impact. Yet, the drums are placed a little further back than the riffs within the mix. As a result the drumming comes off with a somewhat subdued effect whereby had they been further afront in the mix they may have been a little too prominent and clashed with the riffs for our attention and impact. In addition, the band are not forever dishing out blast beats which I found pretty interesting. The band are vying for a blistering onslaught yet, through a controlled drumming performance, the band ensure your attention doesn’t just go with the wind. You’re always able to follow what’s happening which, for such a chaotic sounding album, is no small feat. The gradual patterns the drums utilise ensure you can follow the flow of songwriting without deviating too far astray nor are you going to get lost within the mayhem. The drums ultimately act like an anchor, keeping you rooted as the band unleash everything they have to offer.

What I absolutely adore about this album is how unrestrained the band have allowed themselves to be. With so many well produced and mixed extreme metal records out there, it’s a joy to encounter a record that isn’t afraid to be absolutely unrepentant in what you’ll experience. There is the full possibility that, from start to finish, there is a good chance you will miss something that the band wanted you to check out. There’s a likelihood I missed something I could discuss or something worth remembering from this album, however that’s where the underlying blessing is. It’s the act of discovery that makes albums such as these the adventure they are, all the more so when Cruz often extend their tracks upwards of 7 or 9 minutes long. Even throughout their longer pieces, there are parts of their sound you may miss but will discover anew upon repeated listens. Even as the pacing slows down from time to time, the intensity never wanes so there’s always something waiting to be discovered.

In conclusion, Cruz offer up an album that is absolutely primal and holds nothing back in regards to its intensity yet understands fully how to apply its songwriting to the maximum effect. Cruz are a living example that possessing a dirty death metal sound can greatly benefit your when you also have the various elements in play to ensure the album’s grit had a meaningful reason to be there. I did appreciate how the band didn’t just make this a complete speedfest. Owing to the lengthier tracks the band employ, there’s more than enough variety in their songwriting to make this a worthwhile, competent listen. It knows when to relax and when to roar into your face. I’m glad I encountered this band, for this was an album I thoroughly enjoyed.