Album Review: Cro-Mags - In The Beginning
Reviewed by Dan Barnes

Hallelujah - at last, something to rejoice in 2020 - for, after twenty-years without a new collection of tunes, the new Cro-Mags full length album is finally here. The complications and struggles over ownership of the name is for another day, but now Harley has full control over the Cro-Mags brand he has wasted no time in delivering a killer record.

Teased last year with two singles, Don’t Give In and From The Grave - both featuring three different tracks that would find their way onto In the Beginning, Harley and his conspirators have crafted 38 minutes of glorious Crossover.

From the start, In the Beginning lays out its stall as being a brutal journey through Harley’s experience and life-view. Tracks like Don’t Give In and No One’s Victim are open and honest manifestos to the power of positivity, regardless of the circumstances in which you find yourself. In fact, the whole of the album is a chest-beating statement to not allowing the slings and arrows of the modern world to break your resolve. 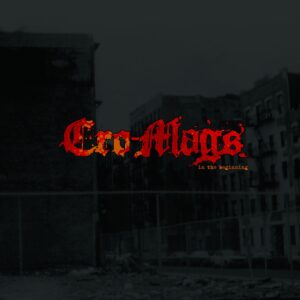 Musically, In the Beginning sits closer to the crossover- thrash of Best Wishes than the hardcore of The Age of Quarrel and from the word go it is a relentless voyage of killer riff after killer riff. Harley and Gary Sullivan lay down a foundation upon which Gabby Abularach and Rocky George can dance around each other, one laying down massive riffage while the other embellishes the music with some fierce metallic soloing.

In the Beginning is a record that is more than the sum of its parts. While the likes of the fist-pumping Drag You Under, the thrash-sensibilities of No One’s Coming or the Judas Priest homage that is From the Grave are guaranteed pit classics, the album is best listened to from start to finished. This way Harley’s vocal performance can truly be savoured for what it is. From the gruff growls of No One’s Victim through to the near-Gothic vocals of No Turning Back and The Final Test, In the Beginning really is Harley Flanegan making a statement about his and the Cro-Mags’ position as pioneers of their craft.

It’s always been the lazy option to dismiss the Cro-Mags as merely one of the NYHC scene’s original players, but to do so is to overlook the diversity of their sound. One Bad Decision closes with a Gregorian chant, Two Hours embraces Hip-Hip rhythms and uses repetition to reinforce the monotony of a spell in jail and the instrumental Between Wars plays it slow and laconic, using hypnotic rhythms and layering unfamiliar instrumentation from piano and cello into the mix.

So, when you get asked in the future what happened in 2020, there’s no need to bring up bush fires, floods, global pandemics, lockdowns or race riots. Instead, smile and rejoice that the Cro-Mags put out In the Beginning; for Harley Flanagan has created a crossover masterpiece.