A band that have long lurked in the outer reaches of my consciousness, Shadowflag’s fourth long player brings them sharply into focus. I saw them play at 2018’s Winter Eradication in Fuel Rock Club in Cardiff, where their set went down well but the confusion around the duel vocals of Gray Preston and JJ Flames left people scratching their heads at the allocation of roles.’ In Asylum Requiem’ thankfully doesn’t present that challenge, and instead reaches forth icy tentacles that coil and wrap around the listener for just over 30 minutes of devastatingly good black metal. Complex passages merge to create dramatic and foreboding soundscapes that rise and fall in imperious fashion. 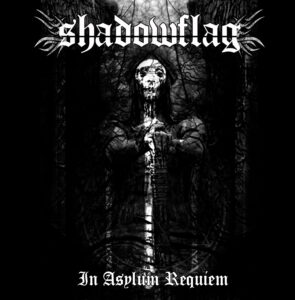 Three years since ‘The Delusion Machine’, Shadowflag have regrouped and spent the time wisely. ‘Lest Thy Night Be Thorned’ rages with an inky darkness, the concluding chanting merely adding to the sheer terror of the track. The title track emphasises the maturity and confidence of a band on their fourth release; every muscle and sinew strains to provide a cascading black wall of tremolo riffing, blast beats and horrific vocals that haunt with a venomous chill.

As ‘In Asylum Requiem’ progresses, so does the evidence of the band’s creative pathway. The Cheltenham five-piece have utilised numerous influences and styles to create an individuality that allows them to steer away from the routine. ‘One Beast One God’ combines an industrial undercurrent with howling guitars and screaming noise whilst ‘From Agony To Cold’ defines the band in one five minute piece. All this pales when one arrives at the majestic closing track. ‘To The Earth, To The Corpse, To The Sea’ is a suffocating cinematic epic which combines orchestral and choral effects with precision black metal riffing and croaking vocals in an cataclysmic conclusion to an album that is high on quality. The Omen soaked harrowing mid-section haunts, the eeriness stealing the breath as you wait for the inevitable increase in tempo. Black metal can be brilliant, and it can be terrible. Shadowflag’s patience has ensured that they firmly sit in the former camp.