From the opening riffs of opening song ‘Suicide By Drummer’ the listener is hit by a battering ram of HEAVY! By those opening notes as a listener you know exactly what this band and indeed their new album ‘Excruciation’ is all about.

The Connecticut doom outfit Curse The Son are all set to release their fourth studio album on the world this week. The band have had their own trials and tribulations since releasing ‘Isolator’ in early 2017, having lost a drummer along the way, bassist Brendan Keefe then suffered extensive injuries in a motorcycle accident which put the writing of ‘Excruciation’ on hold for a time. But all of those trials have fed into this record making it both depressing and uplifting in equal measure. 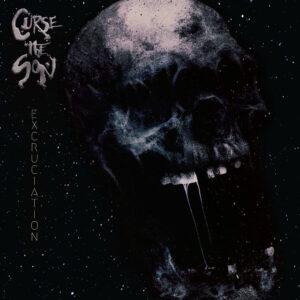 Album opener ‘Suicide By Drummer’ tells its own tale but is dripping in the influence of Black Sabbath, those Tony Iommi inspired riffs ooze through giving a feeling of familiarity to proceedings. ‘Novembre’ is different, keeping the elements of stoner rock and doom at the fore but changing tempo and adding a bit of grunge along the way. Sounding like a mix of Black Sabbath and Alice In Chains in an interesting juxtaposition of styles.

But then ‘Worry Garden’ rises from quiet beginnings to raucous, fuzzy guitars and driving home everything doom should be. Title track ‘Excruciation’ is a sombre, softly sung number, slow paced and thoughtful in delivery. ‘Infinite Regression’ displays an edge of raw energy, powerfully building throughout to crescendo and ‘Black Box Warning’ takes us back to the doomy drone of before.

It’s an album that will appeal to doom fans everywhere, it experiments within the genre, it’s pushes its boundaries with it’s hint of grunge and other intricate details, but ultimately it’s a heavy slab of Sabbath worship and there is absolutely nothing wrong with that!