You’ll have seen a lot of coverage about North East collective Scarred By Truth recently. Carl Black reviewed the single ‘The Plight’ back here in May, whilst the UK Thrashers site recently interviewed the band on the weekly podcast. ‘The Plight’ was included on the excellent charity thrash compilation ‘Moshin’ The Roof On’ and the Facebook page Thrash Metal Album of the Fortnight Club also featured the band. With such positive support, it was an E.P. that intrigued and promised much. The background to Scarred By Truth was covered in depth on the interview on UK Thrashers and is worth checking out.

Formed in 2019 by Deej Lake (aka Corvus Vocals/Guitars) and Mike Todd (aka Cremave - Bass/Guitars) and are joined by various musicians who move freely in and out of the band. The E.P. line-up includes Robbie Moore aka Soloman on drums, Danny Hardman aka Templar on lead guitar and the rhythm guitar of Marty Elmer aka Reikon.

One of the things I like about their approach is their declared intention to be ‘genre fluid’. Now, before those who object to anything that challenges stereotypes get outraged, although if you do then maybe you should jog on anyway, this is merely a description to avoid being pigeonholed. It allows Scarred By Truth to create the music that they want to make, avoiding many of the trappings that can limit creative exploration. 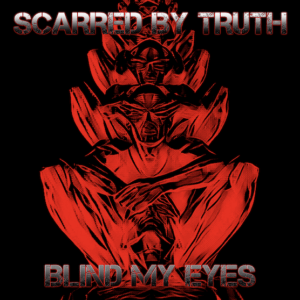 The title track to this five-song E.P. combines numerous influences in a melting pot of thrash, doom and industrial styles. To me, there’s a blend of Korn and Ministry with a slightly thrashier feel on ‘Blind My Eyes’. Plenty of power and emotion combine with raw slabs of riffing guitars in a maelstrom that swirls around the listener. It’s an interesting song largely because it combines so many influences; it forces the listener to work a bit. I found Corvus’s vocals strained at times, tone occasionally wavering when he pushed his voice hard although his Jonathan Davis-esque delivery worked well overall. Meanwhile the punkier approach on ’Scarred’ suits better and allows his snarling lyrics to be spat out with real venom.

The band are unafraid to tackle social commentary – greed, poverty, homelessness, mental health, and the controlling corruptive nature of the media are all on the agenda. ‘The Plight’ has been reviewed elsewhere, so I’ll merely say that it’s another whirling combination of chaos and passion, the driving bass and double kicks providing a concrete foundation for the expression that the band crave. The final duo are the feisty ‘666’ which has crashing riffs, a slower pace and which relies on the intensity of the content rather than the visceral power of other songs, and the ferocious thrasher ‘The End Is Nigh’ which is so explosive in comparison to the rest of the E.P. that you wonder where its come from. It’s a brutal slab to end an E.P. that is both interesting and challenging. Whilst ‘Blind My Eyes’ steers away from my more routine listening, the opportunity to review something which has differences to the norm is welcomed.