Guillotine or rather, Guillotine A.D., have returned. Effectively marking their rebirth, Born To Fall is the band’s second studio release and yet, owing to the alteration in their name, it is also their first under the moniker of Guillotine A.D. no doubt due to sharing a name with many, many other bands of similar ilk. Formed originally in 2016 under the name of Guillotine, hailing from Georgia, United States, the band very quickly got to work, releasing their first self-titled album by late 2017. But, a number of years pass, and the band soon went quiet, likely due to the issues in name and trademark, soon seeing Guillotine adopt the A.D. moniker to their identity before long as various bands have done so beforehand now. A new album on the horizon, its basically a rebirth for the band; a second chapter for them to play out their wishes and what their sound can offer to people. Let’s dive into this work of thrash/death metal to see whether Guillotine A.D. have something truly worth sharing.

The songwriting that the band employ here is very controlled. When you’re listening to the band play, it feels like every note is where it’s planned to be, every utterance of the vocal performance and whatever pitch and tempo the delivery is, is working towards is precisely what the band intended. In this respect, Born To Fall is a well written album because there feels to be such little deviation between what the band planned out and what we actually got on record. That demonstrates discipline of their craft and an understanding of what they are capable of. The general soundscape doesn’t try and reach out of the record to grab your throat, nor do the band try to make something more boisterous than what they’re capable of churning out. It’s a curious sounding album, as while it feels very controlled and mapped out for what their sound will entail, it never feels stifled. It never comes across as overtly rigid and unbending to new and different horizons. The band take full advantage of their innate power, derived through the riffs, vocals and songwriting, that are bristling with strength, and yet they’ve managed to contain that strength within a framework that’s deeply organised, giving us a clear idea of what they want to do. Not every day that I can say that about a death metal record.

To help solidify that sense of an organised songwriting technique, the band utilise a guitar tone and style that is really rooted to Earth. Experiencing these riffs requires no effort at all on our part, as their clarity within the mix and the complete absence of reverb, results in a guitar attack that is extremely clear to make out what is going on. It should also be noted that ease of comprehension, in this case, does not mean a totally clean soundscape. The riffs may have this particularly refined essence to them but that doesn’t mean they’re lacking power altogether. Their presence is to be noted at all times, they’re very clearly at the forefront of the album and are capable at exerting their strength to us, yet never at the expense of losing our understanding of where they’re going. This is an exceedingly well planned and approachable record, especially for new fans to either the band or extreme metal in general. 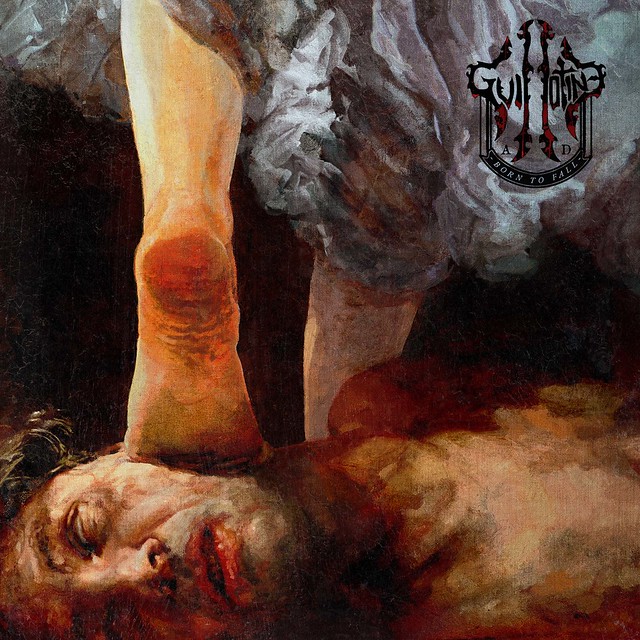 Owing to how the band approached songwriting for this record, they’ve crafted tracks that aren’t massively long but feel more in depth and realised than what some bands have pulled off throughout the year. Frankly, this album isn’t that long and the tracks are your usual length you’d find on any conventional record. But what allows Born To Fall to feel as in depth as it does, comes down to the steady pace that the band approach their sound at. The band could have absolutely approached this record as a speedfest and it may be just as effective, but by bringing the pacing down a touch they’ve been to create that clarity of songwriting, they’ve been able to give more time and attention to tracks that, from some bands, would be regarded as smaller and less impactful pieces. The band help to instil within you, this sense of time and care spent on each song that comes your way. The band aren’t merely throwing one track after another at you in a bid to see what sticks. It’s a shared collaboration whereby you put your attention into the songwriting because the band have done so equally too.

I think the choice of vocals were the right one, in the context of this record. When you look at the instrumentation, it’s rather rooted to the ground and possesses a strong bass behind its sound; the same can be said for the record in its entirety. It’s why I believe the diverse vocal performance comes through quite well. The vocals can be the fairly baritone affair you’d expect from a death metal act, but most of the time they’ll change, and this snarling edge will be brought into their delivery to give the record that harsher offset. I personally believe this was a great choice on the band’s part, as it helps to create something with more diversity than what is otherwise a well written album. Had the band stuck with a predominantly baritone form of vocals it could have lent the record a monotonous tone; utilising a harsher style from time to time allows the band to feel well-rounded. It saves the album from sounding like a good record, to becoming a great one.

In conclusion, Guillotine A.D.’s second album is a triumph. Coming nearly five full years following their first record, Born To Fall is a textbook example of exceptional songwriting that’s additionally coupled with a band that knows how to put care and time into their craft to ensure it’s the best possible work it could be. Practically void of guitar solos and almost absent entirely of blast beats, Born To Fall is a record that lives and dies by its writing and, thankfully in this case, it succeeds with flying colours. This record hits like a cinderblock wrapped in cotton wool, demonstrating a keen eye for tone and power. I was really taken aback by this album, considering how short notice I took it upon myself to review Born To Fall, but I’m so thankful that I did so now. A work of thrash/death metal that showcases how you don’t always need to be blisteringly fast, nor savagely ruthless, to be one of the best contenders in the world of extreme metal today. Sometimes, taking a step back is all you need.