When I saw the name ‘Elimination’, I quite wrongly assumed the band was going to be an Overkill clone, churning out sub-par ‘Hello form the Gutter’ type songs. Sometimes it’s good to be wrong!

‘Elimination’ is an old-fashioned thrash band, hailing from our own fair isle, darkest Suffolk to be precise. I was surprised to find out the band has been around since 2007 and already have supported the likes of Forbidden, Accept, Evile and many more, and also have two full length albums and a few other E.P.s to their name, although this is the first new material released since 2011. The only surviving member from back then is vocalist (and now bassist as well) Neil Stevens, who has recruited two new guitarists, Leigh Rumsby and David Hill, to complete the revised line-up. 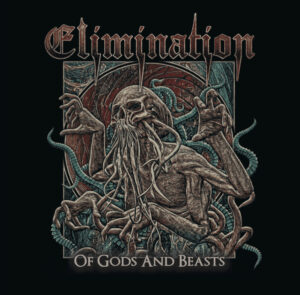 Comprising three brand new tracks, 'Of Gods and Beasts' is an impressive return for the east Anglian trio. The band cite Slayer, Kreator and Death as influences, but I also detected a subtle dash of NWOBHM, as there is a definite UK stamp to their sound, which is always a good thing to these ears. The band has obviously decided to concentrate on quality for 'Of Gods & Beasts' after being away from the limelight for nine years. Lead track ‘In the Name of Violence’ is a great way to reintroduce themselves, starting with a nice guitar squeal, the frack soon settle in to an lively riff progression, before Neil’s gruff, but still melodic, vocals carry the song forward, the chorus is an enjoyable shout along affair before the band slow things down around the 1.40 minute mark with a cool heavy riff and some more gang vocals, then a nice Slayeresque bit of speed, picks thing up before the opening riff propels you along to the end, great start. ‘The Return’ keeps the impetus going nicely, it’s a little slower than ‘In the name…’ but no less energetic, a powerful chord based riff leads into a more melodic refrain and again the chorus is very catchy without being obvious, and I really like the strong tuneful guitar solo section, where the band flex their musical muscles, with some very tasteful leads. Last track ‘What Have I Done’ introduces itself with a stuttering, muted riff which evolves throughout the song and continues the band’s love of melody, and there’s good use of tempos throughout this track that works really well, they certainly have taken their time to inject quality into all three tracks on this release, and there really is no substitute for quality.

Production wise the sound is very well balanced, the guitar has a nice crunch and bite to it, and the drums sound nice and full, the bass is perhaps a little hidden, but that’s no real surprise in this genre, but does its job adequately. I don’t know if ‘Of Gods and Beasts’, is the precursor for another full length, or if the band is just dipping their toes back into the scene. I certainly hope there is more material in the pipeline, and that this comeback E.P. manages to get the momentum back that the band obviously had previously. Until then I have a back catalogue to explore. Definitely recommended.