Hardcore is the scene that will never die. You will always have an audience of disenchanted youths who love to come together and pit in front of a band who are comprised of disenchanted youths. They are genuine and sincere, believe in what they do and above all else, love the music. (And I’m talking about bands and fans) You will never get to the dizzy heights, but there is always someone out there for you.

Memphis, Tennessee hard-core band, Reserving Dirtnaps, are tapping into the youth of today and have been going for seven years. In that time, they have come up through the local scene and have started to play further afield. Progression in the purist sense, play live and get bigger, then expand. 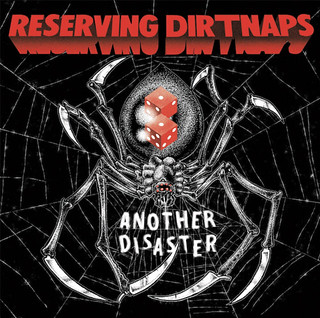 However, the hard-core scene can be stifling. Stray from the path, the disenchanted youth may well become…. well, disenchanted. Reserving Dirtnaps have been straight up with fans, they recorded this E.P. live. Again, one for the purist. Not many bands doing this these days. The music itself is hardcore as you’d expect, that borrows from Agnostic Front and 25 ta Life. Brutal pounding riffs, some gang vocals, slower riffs that play out the songs, effective double bass playing. You could say, “standard stuff”.

There are a few, more interesting ideas blossoming. Take the chorus in 'Sleepless'. After the main punky riff, you get a contrasting set of riffs with in close proximity of each other that gives the song a little extra dimension. Fans will love it. They will be in the pit, screaming into Brand Pearce’s mic to every word. If they keep working on the dimensions of certain riffs Reserving Dirtnaps could rise to the top of the hard-core scene.

'Another Disaster' is released on August 21st via WAR Records