2019 saw New Jersey’s outfit Hath release their debut album ‘Of Rot and Ruin’. It was a ferocious mix of death and black metal, blackened death if you please and certainly was an impressive hour of brutality. With the band now on Willowtip Records, Hath have been given the opportunity to reissue their debut EP, ‘Hive’. Originally self-released on digital format, the remastered’ Hive’ will be released on CD, vinyl LP, and digital formats and includes a brand-new song, ‘Artopus’. 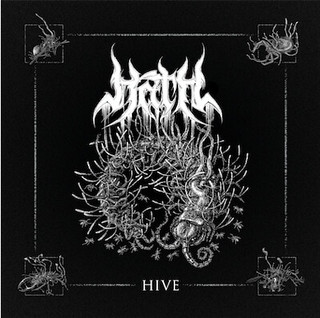 ‘Hive’ isn’t a short EP. With the inclusion of the ‘Artopus’, it clocks in at 38 minutes. Longer than many albums. ‘Hive’ opens with ‘Apparition’, a skull pounding yet complex and dynamic track which in essence summarises the early Hath sound. Multiple textured layers provide a sonic soundscape which focuses the attention, with intricate forays into more progressive intimate segments. The drumming is ferocious, AJ Viana demonstrating a brutal level of power. ‘Apparition’ closes with a gentle fade that segues neatly into ‘Replicated’, a grinding six minute track that opens with a battery of double bass kicking and concrete mixer guitar riffs, pauses to allow the duel guitar work of Peter Brown and Frank Albanese to come to the fore at the mid-point, the track halting to allow an acoustic duet, a moment of calm amidst the maelstrom before erupting back into a frenzied cacophony of bludgeoning death metal.

Remastered by AJ Viana, ‘Hive’ provides an opportunity for fans of the band to obtain a physical copy of an important milestone for the band. Three other tracks follow before ‘Artopus’ rounds the EP off in fine style. Written in between ‘Hive’ and ‘Of Rot and Ruin’, it is a clear bridge between the two pieces of work and represents the shift in the band’s sound. and really represents the shift in our sound between the two releases. Shimmering tremolo riffing, crushingly powerful passages combining with the guttural duel vocal delivery of bassist Greg Nottis and Albanese, and some incredibly complex guitar work threaded throughout, the climax sees duel clean and growling vocals soaring to the mighty conclusion.

For those who purchased ‘Of Rot and Ruin’, ‘Hive’’ is likely to be an important physical purchase. For those yet to dip the toe into the Hath pool, ‘Hive’ is the ideal starting point.

‘Hive’ is released on Willowtip Records on 2nd October