Occasionally you take a punt on reviewing something a little less to your tastes. Described as brassmetal, Italians Ottone Pesante certainly ticked that box. ‘DoomooD’ is their third album and with the voice of Cattle Decapitation’s Travis Ryan guesting on their previous release, there is certainly some gravitas. Comprising Francesco Bucci – Trombone, Tuba; Paolo Raineri – Trumpet, Flugelhorn; and Beppe Mondini – Drums the resulting 34 minutes were most definitely an experience. 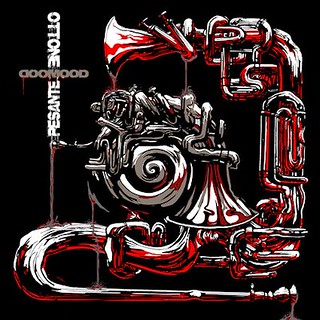 The music that Ottone Pesante play is dark, heavy, and aptly described as a palindrome trip into the abyss of soul in a hostile, asphyxiating, distressing environment. It flows naturally, each song segueing into the next with well lubricated ease. The arrival of some carefully arranged vocals courtesy of label mates Messa’s Sara B provides a haunting feel to the track ‘Tentacles’ but elsewhere it varies from crushing heaviness, frantic drumming and on occasion, I have to say, the rather disjointed sound of an orchestra tuning. It’s something that really is aimed at a niche market.

With over 350 shows under the belts, Ottone Pesante are no slouches. Their combination of metal, jazz and Avant Garde make them an interesting combination and I can certainly applaud the musicianship. At times, it does all become a little bit overwhelming and after two listens I admit I wasn’t desperate for a further play immediately.

There is a darkness about this band which is reflected in some of their wilder songs. ‘The Serpentine Serpentone’, complete with screaming male vocals is a crazed, maniacal ride; the pomp of ‘Strombacea’ changes pace substantially whilst ‘Grave’ swirls in a haunting demi-mist and imposing cacophony. There is no denying that Ottone Pesante have dismantled barriers to deliver their own style. If you want to go outside of the proverbial box, you may do worse that to enter ‘DoomooD’

“DoomooD” will be released on September 18th, 2020 via Aural Music.