Think of something big, actually think huge, and then think bigger, because the first thing that hits you about ‘Circle of Darkness’, is the guitar sound and the size of the riffs, they are simply massive. Opener ‘Play the Victim’, once the intro subsides, hits you like a wrecking ball, power chords like boulders rain down on your senses, it’s hard to believe that they are a one guitarist band. The bass rumbles along underneath like an out of control steamroller, the drums crashing and pounding like a primordial thunderstorm. And over all this, the devil shouts his wares. 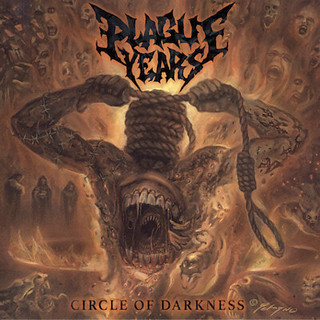 ‘Circle of Darkness’ is the band’s debut full-length, having already made waves with 2018s ‘Unholy Infestation’ EP. Playing a brand of thrash with both hardcore and blackened death metal influences, there’s a primitive tribal groove to the tracks, if early man had had access to music back in his cave, this is the stuff he’d be listening to while skinning that woolly mammoth he’d hunted for his evening feast. Standout tracks include the already mentioned opener ‘Play the Victim’, ‘Witness Hell’ and the title track are a little bit faster and both bludgeon you round the head with their aggression, before slowly disembowelling you around two thirds in. Eric Launder also shows he has a knack with solos as well as punishing riffs. ‘Paradox of Death’ has an evil intro before shifting into a hefty shuffling groove. Closing track ‘Urge to Kill’ is the longest and has some nice dynamics.

If you like your thrash heavy as a tank, Plague Years might just be the band for you, the band reminded me of early Obituary in terms of sheer heaviness and weight of guitar sound, early Kreator and Sepultura also spring to mind. And they might also be worth checking out if bands like Power Trip and Skeletal Remains are your bag. This is an incredibly heavy and competent debut album, if I was being ultra-critical, perhaps I’d have liked a bit more variation, especially in the vocals, but that doesn’t distract from the overall enjoyment I got from listening to ‘Circle of Darkness’, definitely recommended.