While everyone is adjusting to uncertain times right now and finding the best way forward, BLOODSTOCK is choosing to remain positive and keen to be reunited with the best metal community next summer. With that in mind, BLOODSTOCK is pleased to reveal five more bands joining the Sophie Lancaster stage line-up next August, and another five bands re-confirmed from 2020 for 2021.

Joining the fun on the Sophie Lancaster stage on Friday, are Spanish blackened death metal crew, NOCTEM. The respected group released their latest, fifth album, ‘The Black Consecration’, via Art Gates Records last November. Wrap your ears around it in its entirety over on YouTube here.

Also appearing on Friday, are Merseyside headbangers DEIFIED. Metal Hammer described their album ‘Anthrobscene’ as “apocalyptic lyrics and mechanical atmospheres” stating, “Deified are an intriguing prospect that is now beginning to unfurl.” Curious? You can stream it here or pick up a physical copy here.

Additionally, Welsh blackened metalheads AGRONA are added to Friday’s bill. Hailing from Cardiff, the band have spent lockdown crafting new album ‘Straeon Gwerin’ - the follow-up full-length to their crushing debut ‘Realm Of The Fallen’ which you can explore here. Expected out in 2021, the band say it’s “a collection of morbid and maudlin tales predominantly from Welsh folklore.” New tunes at BLOODSTOCK then?

If Friday wasn’t metal enough already, the epic, melodic doom of GARGANJUA might just seal the deal. Sound like your kind of thing? Head over to their Bandcamp page here and chuck ‘em a few quid to check out latest EP ‘Fallen’ as well as the last album ‘Toward The Sun’, released in January.

Brighton beasts KING GOAT add their progressive doom to the Sophie mix on Saturday. Engaging and atmospheric, BLOODSTOCK is delighted to welcome back these once-upon-a-time New Blood champions. They’re working on new music, but meanwhile, if you don’t already know it, investigate their last album ‘Debt Of Aeons’ here.

Never been to BLOODSTOCK before? Watch a trailer here.

Standard weekend tickets for the extended, now 5-day event in 2021 remain under a temporary price freeze at £145 (+ booking fees). In addition, child tickets and parking tickets for 2021’s event are available now at the ticket store, as well as a limited number of day tickets. VIP and campervan tickets for 2021 are sold out. 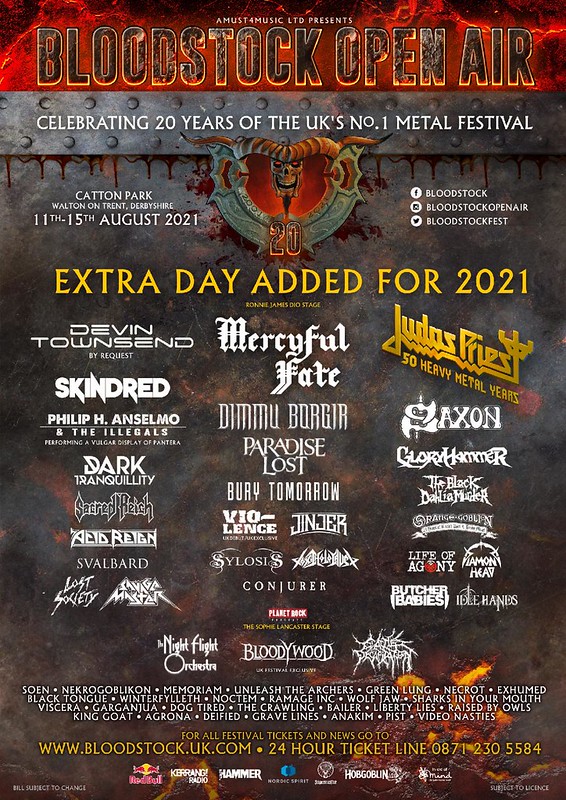