Album Review: Under The Oak - Ripped Up By The Roots
Reviewed by Carl Black

I do like Christmas. Who doesn’t? Good will to all men, roasting chestnuts on an open fire, crap TV and all that. The best part of Christmas is when you have to drive somewhere, usually a relation you’ve not seen since last Christmas, and you pull into a service station for a refill, a Gypsy's Kiss and a sandwich. There, in amongst the usual dross of fillings is the holy grail of the breaded snacks, a "Christmas Dinner Sandwich". Of course you buy it. Tis the season after all. You get all the trimmings, Turkey, Stuffing and then some clever dick has decided to add Cranberry Sauce. Great idea, the only trouble is the sweet berry supplement totally overpowers the sarnie, so much so you feel like you just had a jam sandwich. Nothing wrong with that, its ok at your nan’s house or a kiddie’s party, not when you’re on the road in December. 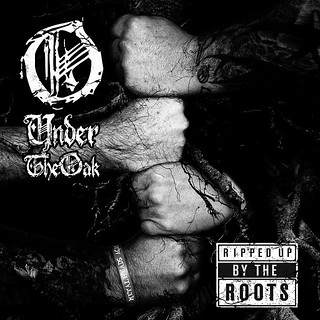 This is my overarching feeling with Under the Oak. A thrash tribute band who have gained a reputation of playing a selection of bay area thrash covers, but now present a bunch of original material. But each element of the band overpowers the other to the point where the songs suffer. Frontman, Jostein, has a strong clean metal voice. It’s a little one dimensional which makes the songs a bit similar and is difficult to tell one song from another. The bass and drums of Hillbilly Bill and Marius mirror the vocals. Competent, but nothing that makes me want to get down the front and in the pit. The riffing from guitarist, Bolverk, is again adequate but akin on each song. The lyrics need to be better. 'Chaos In The Pit' has shades of Exodus' 'Toxic Waltz' about it. I don’t think anyone should try and better that for a pit song. We then get the dreadfully named 'Butterflies and Unicorns' (everyone knows that Unicorns instantly die of kidney failure if they come within five paces of a butterfly).

So this album should be varied and diverse, bearing in mind the amount of cover material they play live, they should be well versed in the different dynamics of thrash, but end up hitting only one aspect. They hit it well in a power metal mid paced, thrash way, which is fine in certain settings and contexts, but they missed an opportunity to really explore. Be brave next time and push the boundaries, add some roast ham and go easy on the jam.