Album Review: Ironed Out - We Move As One
Reviewed by Dan Barnes

It’s always refreshing to hear a band breaking the boundaries of its chosen genre and, by so doing, establish themselves their own, individual place there in. Ironed Out’s latest release, We Move as One, sees the London crew following up a couple of EPs with a full-length which presents a new take on the Hardcore genre.

Ideas from both Us & Them and In These Ends are refined and polished and allow Ironed Out to deliver some of the most interesting music to emerge from the scene. The Gatekeepers of the genre might well find themselves mightily miffed as Ironed Out use Hardcore as a starting point from which to launch a ferocious musical assault, which encompasses such diverse styles as Hardcore, Metal and Hip-Hop. 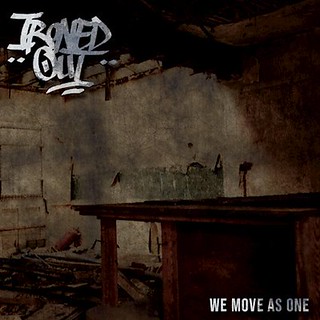 Blended together this cornucopia of sound sits perfectly with itself. Big metallic riffs, meaty guitar tones and heavy chugs combine easily with Hip-Hop/ Grime influenced vocal lines. Pavement Strong contains more than a nod to Slayer in its fat sound, before adopting a galloping Hardcore sensibility and delivering an almighty beatdown.

We Move as One is a record that feels born on the street. The gang-vocals and the combination of musical styles merge to create a unity of purpose. But there is always a sense of danger lurking within every note. Even the more upbeat Crazy Old World, with its huge groove and alternative chorus, seems to be a smiling assassin.

If you are yearning for something straightforward from Ironed Out they roll out the more traditional take on the genre with All Hope is Lost and Our Struggles Don’t Count, albeit with a sizable metallic element attached. Then counter this with the Grime-heavy 6 Weeks and the album’s title track.

There have been some fantastic Hardcore releases so far this year and We Move as One must surely sit among the upper echelons for 2020. If you’re new to the genre or believe that Hardcore is a one-dimensional style of music, championed by vegans and teetotallers, then Ironed Out will surely change your mind. But, be warned, if you are going to walk these streets, you might need a bodyguard.