Album Review: Solitary - The Truth Behind The Lies
Reviewed by Paul Hutchings

Always threatening to push through into the top level, Preston based thrashers Solitary have long mirrored their town’s football team. Skirmishing with the play-offs, but ultimately falling away. 2017’s ‘The Diseased Heart of Society’ was a reasonable release but didn’t quite push them in the way needed. Celebrating their 25th anniversary at Bloodstock last year, their ferocious assault had me scratching my head As I watched them rip the Sophie Tent to shreds. Why weren’t they talked about with the same reverence as Xentrix, Acid Reign and other such UK stalwarts? Their ‘XXV’ EP provided a taste of things to come, with three reworked tracks and a couple of live songs.

26 years since Solitary first formed, we finally have album number four. It opens in explosive style, with some frantic shredding as ‘I Will Not Tolerate’ races away like an unbroken stallion. It’s a frenetic start to the album, the band’s pent up frustrations dissipating in a maelstrom of powerful riffing, machine gun drumming and the dominating snarl that is a trademark of founder member Richard Sherrington. As opening tracks go, this is about as in your face as you can get. 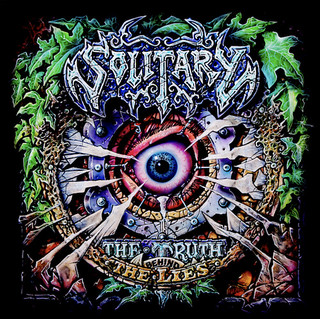 The sound on ‘The Truth Behind The Lies’ is excellent; credit to the production of the returning Simon Efemey who captures the energy that surges through Solitary but who has also managed to encapsulate the raw, gnarly sound that Solitary have always delivered. ‘The Dark … The Resilient’ is heavy, almost a thrashing stoner track with echoes of the mighty Orange Goblin. Solitary’s sound has expanded from their earlier work and whilst the pure power of those earlier works remains, this is a mature, balanced and composed Solitary we find slamming faces to the concrete. ‘Homage To The Broken’ is a good example, the wall of thrash laced with other influences which makes it a well rounded track.

Rest assured, there is still plenty of the metal thrashing mad approach. The title track is a steamroller of a track, punishing in its relentlessness. A wall of riffing, roaring vocals that are spat with venom and dare I say it, a smidgin of the bile that raged through early Machine Head? *ducks for cover* That unintentional link brings us to ‘Catharsis’, another blistering full-frontal assault that will ignite any pit, should there be such a thing ever again. Dare I mention the undeniable groove that surges through this pulsating track? Well, I just did! It’s a damn sight better than the MFH song of the same name and in the words of another scribe here at The Razor’s Edge, it’s a bit of a banger. In fact, it’s a rip snorting beast of a song.

To be honest, this album is full of songs that scrape and scratch, bite, and rip at you from start to finish. If this album was released into the wild, you’d place warning signs in the locality to warn unwitting wanderers from stumbling into it, such is the venom that it emits. ‘The Truth Behind the Lies’ may finally push Solitary through that upper level of that stubborn second tier and at long last the four-piece will be able to stand confidently stand alongside the best in UK thrash metal. Having survived challenge after challenge,

‘The Truth Behind the Lies’ is a huge demonstration of the band’s unwavering dedication to the cause and will hopefully be solidly rewarded.