Describing their music as ‘ritualistic necromancy black metal’ is a bold statement. Yet, mere minutes into the opening track ‘Mysteries of the Odious Path’, one can appreciate that this may well be an accurate portrayal. The duo who hail from the American Pacific Northwest do not draw breath for the first three minutes, but in that time, they stake their credentials. Savage, eerie, sinister, and blisteringly fast, Svabhavat’s debut release carries more than a nod to the old black metal masters. This is almost worship at the black altars of Darkthrone, Mayhem et al. 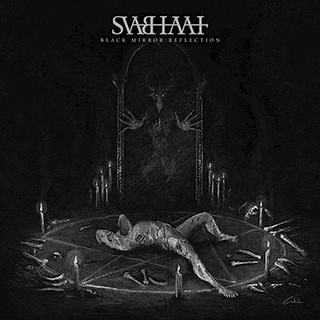 The guitar work jars, the intensity is vile, cold, and cruel. The vocals harsh and overflowing with vitriolic bile, this is raw and bitter. Six songs spread over 37 minutes, ‘Black Mirror Reflection’ is in some ways massively impressive for the work of two people, especially originating from a part of the world rarely known for its black metal overtures. Their work is savage, the harrowing strains of ‘Great Tiamat, Filled with Corpses’ grates like nails down a blackboard and at the same time draws you in. Is that the old school style or the maelstrom of emotion-soaked atmosphere that the duo creates? That’s for the listener to decide.

Intense passages of tremolo riffing, multiple blast beats and those echoing screams combine on each song, forming individual mini epics which intoxicate with a mysterious magical enchantment. ‘Chalice of Poisoned Souls’, ‘Abhicaara’ and ‘Aghori, Flame of Knowledge’ are all ferociously driven, the crude and grisly production ensuring that the traditional sound is captured. Be assured though, this is not merely a tribute to the old guard but a shining flame that stands apart from many of their counterparts. ‘Black Mirror Reflection’ haunts, it challenges, and it roars. Stare into it, take your chances.

Black Mirror Reflection is released through Eisenwald on 30th October