Originally planned for release in late March, the latest album by UK rockers Voodoo Six was pushed back to later in the year because of the Coronavirus. It’s therefore funny to find reviews of the album from six months ago already on the internet. For those unaware of Voodoo Six, their history dates to 2003 when bassist Tony Newton formed the band with Richie Faulkner, yes, him of that their Judas Priest band. Nearly two decades into their musical journey, only Newton remains from their original line-up and Simulation Game introduces new members to the band once more. Nik Taylor-Stoakes continues vocals alongside drummer Joe Lazarus whilst guitarist Tom Gentry (Gun) joins the band on the six strings. One of the biggest challenges that has faced Voodoo Six has been the constant churn of members, so it was interesting to see if the band was now the right balance of personnel.

For a band that has made four appearances at Download and two at Sonisphere, it’s a shame that the buzz around them at the end of the last decade slowly dissipated. 2016’s ‘Make Way For The King’ showed that the band could still write a reasonable hard rock tune. Have they managed to continue that on ‘Simulation Game’? 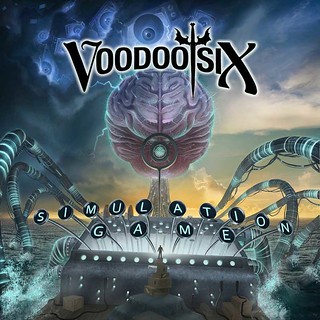 Well, to put it bluntly the answer is overall no. Opening with ‘The Traveller’, it’s clear that Voodoo Six are very much a British hard rock outfit. It’s a brave opener, utilising string sections and thick keyboards to enhance their classic sound. Think Alter Bridge, British Lion, Creed etc, and you’ll get the picture. This traditional sound is continued throughout the album, rich melodies blend with catchy hooks and solid enough hard rock songs.

The band have a big fan in Steve Harris from Iron Maiden and the album recorded at Harris’ Barnyard Studios. The sound and production is big, the bass and drums high in the mix but not to the detriment of Gentry’s guitar or Taylor-Stoakes powerful vocals. All the moving parts are working in the right way, the challenge is whether Voodoo Six have managed to create the killer sound. Disappointingly, there isn’t a lot to really get excited about here. ‘Liar and A Thief’ is decent fare, with a solid riff and some neat guitar work but there isn’t quiet the spark needed. The use of string effects on ‘Last To Know’ alongside a thunderous riff and the smouldering Lost both up the tempo, the latter breaking out into a right royal rocker. The standard ballad ‘Never Beyond Repair’ doesn’t do a lot and ‘Brake’ unfortunately struggles to hold the attention, the synthetic symphonic programming unnecessary and overused. This continues in the final two tracks, especially ‘One of Us’, which again really suffers from the programming which once more distracts from some ferocious guitar work.

For a band who’ve been going as long as they have, Voodoo Six win massive plaudits for their continued efforts. ‘Simulation Game’ isn’t a dreadful album by any means, the musicianship is at times impressive. But it just isn’t going to stand out in a year when so many fine albums have been released. The law of average means some bands will be below the line. This may just about limp over it.

‘Simulation Game’ will be released on Explorer 1 on 16th October