Just over 12 months ago, the metal world had some terrible news, the passing of Morten Stützer, at the tender age of just 57, the loss of a legend, a fallen brother, as surely, we are all one metal family, and this was a real shock to the metal community. All our hearts went out to the band, his friends and most of all his family. 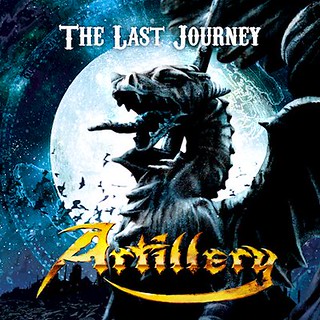 Remember; Artillery were on a young Metallica's list of bands to listen to back in 1983. Metallica also used Artillery's (and Merciful Fate's) rehearsal room when recording 'Ride the Lightning'.

To celebrate the life of their old bandmate Artillery have called upon former members, ex-vocalists Flemming Rønsdorf and Søren Adamson, and together as well as the rest of the band recorded a brand new song 'The Last Journey', an epic and emotional track with lots of acoustic guitar, and heart wrenching melodies, before cranking up the heaviness with the chorus, the middle section also has some bone-crushing riffs, before a beautiful solo by brother Michael. A passionate and touching song.

The band have also recorded a cracking version of Metallica's 'Trapped Under Ice' for the b-side, one of Morten's favourite tracks. All in all a fitting tribute to a true metal icon.