May 20th saw Paradise Lost, the stalwarts of British gothic doom release their 16th album, ‘Obsidian’. The band should have been touring all summer and playing’ Obsidian’ in full in Leeds at a triumphant sold out show. Alas, like so many best laid plans, things have totally gone tits up and the best that the band could attempt was a live stream.

Offering a standard and VIP stream, the band played a 15-song set which comprised some rarely aired gems, along with three songs from Obsidian. So, how do you review a live stream? Well, it is fair to say that there is little atmosphere watching a gig on a TV or laptop screen. But Paradise Lost weave their own mist filled shroud of melancholic misery that we all love. Clad in black, the band, Nick Holmes, Gregor Mackintosh, Aaron Aedy, Steve Edmonson and Walterri Väyrynen hit the stream bang on 8pm, launching into opening song ‘Widow’, one of two tracks from the ‘Icon’ album.

Whilst there was no talking or banter from Holmes, or indeed any interaction between the band, it was a simple joy to see Paradise Lost back on a stage. Like so many musicians, the lock downs have impacted massively on them and they looked hungry to claw even a few centimetres back from the lost distance of the past few months.

With rarities from a grand mixture of their catalogue mixing comfortably with newer music and older favourites, such as a massive ‘Gothic’, this was a set that had been planned with thought. Mackintosh is a superb guitarist, his shredding skilful and understated, his freedom to fire at will released by the rock-solid trio of Aedy, Edmonson and the youthful Väyrynen. Holmes, like the others rooted to the spot, his deathly growls contrasting with the cleaner vocals that are littered through the band’s work.

The sound was crystal clear, the lighting simple and effective and although the band rarely got animated, it was worth reminding oneself that this was Paradise Lost, a band whose live shows are focused on the music. Twelve songs passed in a flash, and then they were gone. Unless you had paid the extra cash for the VIP experience, which was an additional three songs, Unfortunately I didn’t. I understand the closing track ‘Darker Thoughts’ was worth the admission price on its own.

It was great to see Paradise Lost together again on a stage, even in such surreal circumstances. I’d be reluctant to watch another stream by them at this stage. It’s artificial and difficult for all involved. But that’s all we’ve got for now. I hope the band got the audience they deserve, for they put on a great performance. 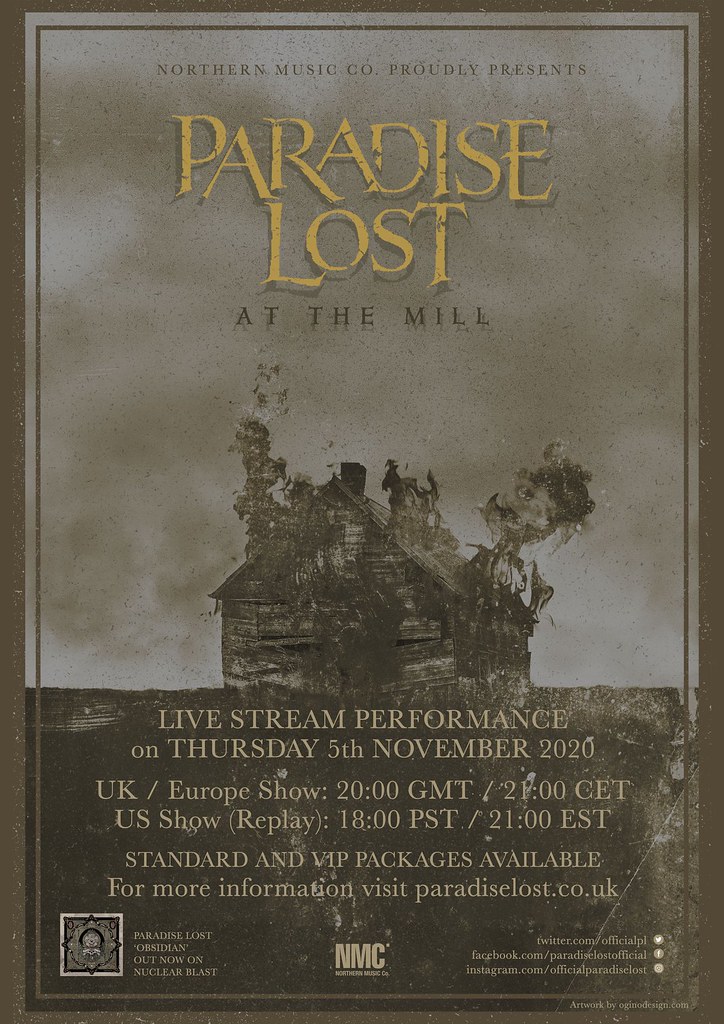 Widow
Fall From Grace
Blood and Chaos
Faith Divides Us Death Unites Us
Gothic
Shadowkings
One Second
Ghosts
The Enemy
As I Die
Requiem
No Hope in Sight
Embers Fire
Beneath Broken Earth
So Much is Lost
Darker Thoughts.