I’ve always been a big sucker for the German old school thrash scene. Compared to the US bands at the time, the German bands were a bit grittier, rawer and gnarlier sounding. Although the big four of German thrash (Kreator, Destruction, Sodom and Tankard) are well known and well respected, there are a multitude of awesome German thrash bands who never got the exposure they so well deserved and have been largely forgotten unless of course you are a thrash addict like myself. Accuser are one such band. They formed back in 1986 and have a total of eleven albums under their belts and although their 1989 album Who Dominates Who is probably their best known, they have released a string of high quality and highly aggressive albums since 2013. This string of quality albums continues with their twelfth album the self titled 'Accuser'. 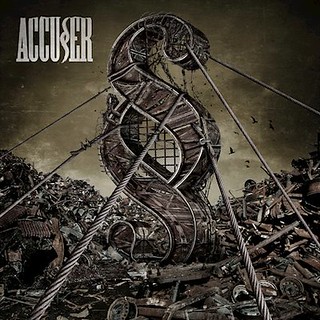 The line up for Accuser is virtually the same as for previous album 'The Mastery' but with one exception - former guitarist René Schütz who originally joined the band in 1987 has rejoined the band having previously departed in 2011. The presence of an old school member of the band doesn’t mean this is a throwback to the olden days of Accuser as this album manages to sound equally old school and contemporary in measure. Cues are taken from classic school thrash as well as groove metal (which Accuser like many thrash bands deviated into in the 1990’s). The songs range from breakneck thrashers such as 'Misled Obedience', 'Rethink' and 'Phantom Graves' to groovier more melodic songs such as 'Be None The Wiser' and 'Psychocision' which also include some clean vocals from frontman (and sole original member) Frank Thoms. You also get the inclusion of some middle eastern style melodies in 'Temple Of All' and the band acknowledge their hardcore punk influences in a ripping cover of Agnostic Front’s 'The Eliminator'.

With their twelfth album Accuser show no signs of weariness and the return of René Schütz to the band has more than likely added even more fuel to the fire. Accuser have been providing solid, neck-wrecking thrash for nearly 35 years and with this self titled album that is apparently not going to end any time soon. This release mixes melody, groove as well as solid thrash aggression to great effect.