2020 has been a busy year for My Dying Bride. It saw the return of the band after frontman Aaron Stainthorpe faced a very traumatic struggle in his personal life with his young daughter battling cancer. Thankfully his daughter won her battle and My Dying Bride struck back in glorious form with the stunning The Ghost Of Orion album in March which was laden with the anguish, grief and despair that Aaron had faced throughout his families ordeal. The band have kept busy and whilst unable to tour in support of the new album have recorded an additional three song E.P. titled 'Macabre Cabaret'. 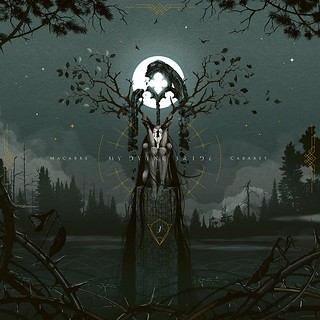 'Macabre Cabaret' in the words of Aaron Stainthorpe “delves into the shadow empire of dark love and the consequences of unchecked sexuality. The deep passion of physical desire and its all-conquering rage over pure love is written bleakly here. A destructive essence within the soul can’t help but rear its ugly head.” It is three songs that vary from each other but still maintain the doomy gothic aesthetics which My Dying Bride are known for. The opening title track is the longest and most progressive song on the E.P. full of melodramatic theatricality and melancholic atmosphere being a song that deviates from doomy riffs to atmospheric keyboard led sections with a mix of sorrowful cleans and anguished harsh vocals. It is a truly captivating song throughout. It is followed by 'A Secret Kiss' which is the most classic sounding My Dying Bride song on the album with the gloomy riffs and downcast melodies that the band do so well. The final song on the E.P. 'A Purse Of Gold And Stars' is the most stripped back and atmospheric of the three songs with a complete absence of guitars and led by the keyboards and violin of Shaun Macgowan and the spoken word vocals of Aaron. It is a beautifully haunting piece rich in gothic atmosphere and had the hairs on my arms firmly standing to attention.

My Dying Bride show themselves to be in very healthy form during 2020. They have followed one of the best albums of their career with a magnificent EP that although short is bursting with quality material. I find dark, atmospheric and melancholic music to be soothing when times are dark and with the bleak existence we currently find ourselves in, My Dying Bride have provided 20 minutes of solace.