Despite being generally all round awful one of the redeeming features about 2020 has been the quality of the new music released and one genre that has had a particularly strong set of releases this year is thrash metal. As a thrash addict this has been particularly pleasing for me and as we reach the end of 2020 the strong thrash releases keep on coming this time from Chilean thrashers Nuclear and their fifth album 'Murder Of Crows'. Nuclear originally formed as Escoria in 1995 before changing their name in 2003 with their debut album Heaven Denied dropping in 2006. They have had a fairly steady line up throughout and have managed to maintain the same lineup from 2012 to present day. 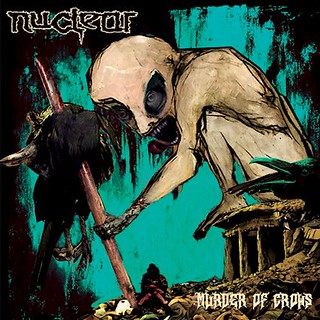 What we have from Nuclear on 'Murder Of Crows' is some truly aggressive and violent thrash with the aggression reaching death metal levels at times and with some definite influences from hardcore punk with some songs very much having a bit of a crossover thrash vibe to them. The songs range from all out aggression such as 'Friendly Sociopath', 'No Light After All' and 'Useless To Mankind' from slower chunkier thrashers such as 'Abusados' and the title track. The variation is welcome and it does provide a little bit of a breather from the all out speed and aggression but there are a few pacing issues and moments of padding. There is a pointless intro 'Pitchblack' and a tedious interlude 'Blood To Spare' as well as a nice sounding but overall pointless acoustic outro on 'Useless To Mankind' whilst 'When Water Thickens Blood' is a snoozefest of a song with a sluggish pace and dreary riffs. I’m not adverse to slower songs on thrash albums as long as they have interesting content to justify the drop in pace. Where this album really succeeds though is in the fast songs and thankfully there are plenty of them. The band put in an absolutely fiery performance throughout the album playing with razor like precision and devastating accuracy. Frontman Matías Leonicio has a Max Cavalera style bark but puts in an assured and passionate vocal performance.

Despite the minor pacing issues detailed above, Murder Of Crows is a shit kicking thrash album which is bursting with speed, aggression and passion. When this album hits its stride there is no thrash metal fan on the planet who wouldn’t have a big grin on their faces. I love the more aggressive side of thrash metal and on that front this album certainly delivers.