If you need some paint work blasting, here’s this week’s top tip. Purchase a copy of Of Feather and Bone’s latest record, ‘Sulfuric Disintegration’, point your sound system at the offending paint work and hit play. 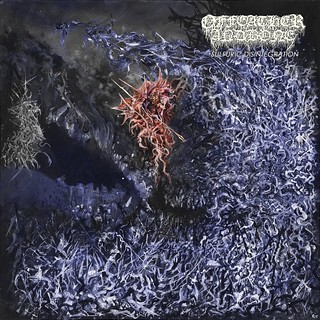 Yes, this release, the Denver outfit’s third is as abrasive, harsh, and brutal a release as you could hope for. An auditory assault not only on the aural senses, but the band also make one of the most infernal rackets that you could expect for a three-piece. It’s explosive from the opening blastbeats of ‘Regurgitated Communion’, an angry swarm of wasps raging over an out of control pile driver. The pace is blistering, the vocals unsurprisingly guttural and unintelligible for the main.

The guitar work is intense, the occasional slicing piece of lead work tears out from the torrent of riffs that are cascading out. Described as a full-on sonic killing machine, there is probably not a better description around. It is a totally relentless album which combines a dynamic musical vision with the darkest blackened death metal and adds in more than a splash of roasting grind. It’s a culinary masterpiece!

At 30 minutes and consisting of six tracks, ‘Sulfuric Disintegration’ hits hard and hits heavy. The wall of sheer intensity that envelopes you on tracks such as ‘Consecrated and Consumed’ and the final song, ‘Baptised in Boiling Phlegm’ must be akin to standing on the beach as that tsunami breaks. It’s that astonishingly devastating. With an incredibly tight production, Of Feather and Bone may have delivered one of the best extreme records of the year.