'Spectre Of Devastation' is the fourth album from Swedish thrashers Warfect and their first album for Napalm Records. They are described as straight from the Gothenburg underground and one of the most convincing and underrated metal acts in the Swedish scene. That is certainly true as despite being a self-confessed thrash metal maniac Warfect are a brand new band to my ears. The band are a three-piece made up of Fredrik Wester on vocals & guitars, Kris Wallstrom on bass & backing vocals and Manne Flood on drums. 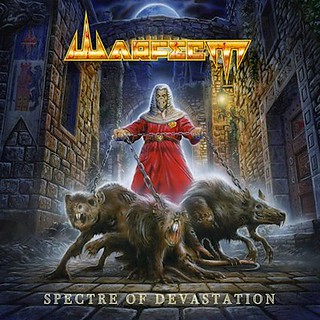 If you like your thrash on the more violent and aggressive side then this really is a must hear album. Warfect are a well oiled thrashing machine with heavy inspiration coming from the uncompromising German thrash style whilst there are nods to more extreme metal genres such as black metal with a definite blackened thrash sound creeping in at times. The vocals by Fredrik are certainly more akin to extreme metal being in the style of an aggressive blackened rasp. Thrash metal always works best to me when there is a chaotic urgency to the music and this is very much prevalent throughout the whole album with blasts of violence, speed and aggression such as 'Pestilence', 'Rat King', 'Colossal Terror' and 'Witch Burner'. 'Rat King' and 'Colossal Terror' also veer into more extreme territory with the tasty use of blast beats. Despite the aggressive violence on display the songs are also very catchy which is also a great feature in thrash with 'Pestilence' and 'Witch Burner' being shout-along thrash anthems. Songs such as 'Hail Caesar' and 'Left To Rot' bring the pace down slightly but are no less effective demanding you bang your heads along rather than dive headfirst into a circle pit. The band are a tightly oiled machine with tight riffs, tasty bass licks and frantic drumming all coming together in 40 minutes of thrash metal glory. A fantastic production and a superb mastering by the legendary Flemming Rasmussen ensure these songs sound as good as they can.

Despite being very much an underground band, Warfect have an album that ensure greater coverage and attention. Thrash metal is a very saturated scene and whilst Warfect don’t really have anything in their sound that helps differentiate them from the countless other bands in the genre they do what they do incredibly well and had this grizzly thrasher grinning from ear to ear. In a year already dominated by superb thrash metal releases Warfect have an album in 'Spectre Of Devastation' that can stand head and shoulder with some of the best thrash released this year. This is uncompromising and catchy thrash that will certainly be wrecking necks.