When you take your band name from a Cro-Mags track – from the Alpha Omega album – then you really have to be confident that you have the chops to back it up. Luckily this German crew have those chops and more to spare.

Settle for More is Eyes of Tomorrow’s eleven-track love-letter to the bands of the Big Apple, whether that be the straight up Hardcore of Sick of It All, Agnostic Front or Madball or the more Crossover influenced bands like Biohazard or the Cro-Mags themselves. 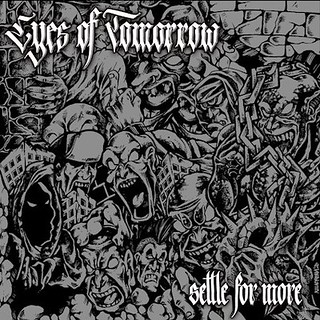 The twenty-three minute runtime is packed with gang vocals and two-step beats, sprinkle in the occasional handful of low-end groove and deep bass runs and it’s a recipe for a frenzied live experience when this lot hit the stage.

The variation of styles makes Settle for More an interesting listen, whether you’re up for the direct approach of the title track, State of Mind or Take My Life or the more Crossover infused World of Lies, Hold On or My PMA, then Eyes of Tomorrow has it covered.

There’s a more metallic feel to the Crossover tracks; Hold On contains a thick guitar chug and a beefy riff, whereas World of Lies veers toward a Thrash sound, slower in pace than other tracks on the album, but no less intense for it.

No matter which style Eyes of Tomorrow adopt, their delivery is of the highest energy throughout and by the end of the relatively short running time even the most hardy and seasoned pit-fiend will be gasping for a breather.

As a tribute to the New York scene, Settle for More is a fine collection of songs; as the work of a band who bear their NYC influences proudly on their chests, it’s a fantastic interpretation and appropriation of the scene’s spirit.