For Gama Bomb fans there has been only one release stirring excitement and arousal this year, and it is that of the bands latest album, Sea Savage. Their first recording for two years and their first on their new label home, Prosthetic Records.

From 2008 when Earache launched them into the heavy metal fans consciousness as part of the labels thrash metal revival they have stood out, different to the norm, taking huge influences from 80’s popular culture and melding it with mid-80’s stylised thrash metal. It was a winning formula from the off. Their tour of the same year, with then label-mates Bonded By Blood, reeked havoc across Europe and despite various line up changes or switches in labels since, the band have gone from strength to strength. 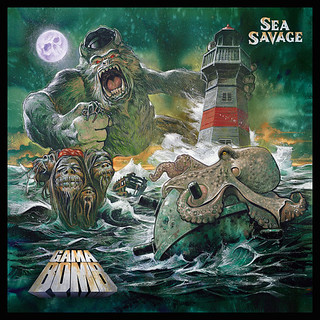 Come 2020, a good twelves years after ‘Citizen Brain’ first destroyed our ears, they return with Sea Savage, inspired by Victorian horror and maritime adventures such as Moby Dick. A concept album, of sorts, although the band admitted to us just last week that the concept lasts as deep as just a couple of tracks.

Opening with ‘Judo Killer’, the song is outside of the usual scope we’ve come to expect from Gama Bomb, taking an almost Judas Priest approach to the tone of the song and setting off at a blistering pace. As title track ‘Sea Savage’ kicks in, that now traditional Gama Bomb sound gallops forth, the Irish twang in Philly’s voice warming the heart of any discerning fan as the "concept” rears its head.

‘Sheer Khan’ is a triumphant, anthemic romp which sees the band take a twist on their conceptual journey, whilst ‘Ready, Steady, Goat!’ is a work of pure genius! As a listener, for forty minutes you must prepare to get your face melted by the pure thrash fury of a band in their element. Gama Bomb set sail as crew on the steamer S.S. Gama Bomb this Friday, destination ‘Parts Unknown’ for a cruise of epic proportions – join them for the ride!