This is one to warm the cold winter nights. 43 minutes of heavy rock from the Texas rockers Warlung and their fourth album ‘Vultures Paradise’. There’s plenty going on to catch the imagination, well played and beautifully crafted.

It's a big sound that Warlung aim for, and they bring it in a huge way with the title track that opens the album dominated by huge riffs which rarely let up for the entire album. There is superb musicianship throughout, with the guitar work of Baba and Bennett on tracks like ‘Demonocracy’ Iommi like in both style and delivery. But don’t get the message that this is a Sabbath tribute band, for that would be totally wrong. Sure, the riffs and the vibe draw deep from the Birmingham legends but there are ample other influences from the recently defunct The Sword through to Swedes Graveyard and Germans Kadavar to name just three. 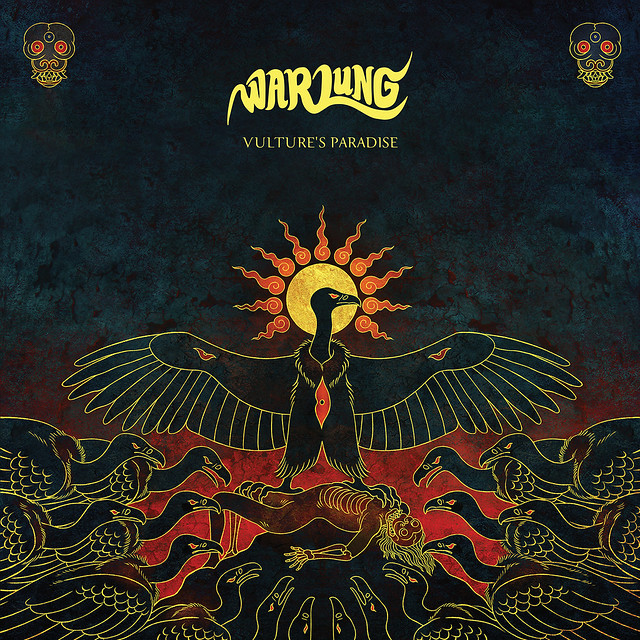 Each track featured on ‘Vultures Paradise’ stands out as a perfectly crafted piece of work. The chug of ‘Grave Marauders’ for example, has a driving groove and some lovely dual vocals on the chorus. It’s a track that motors along, urging you to do weird and fantastic dance moves that will look ludicrous unless you’ve had something to help you on your way!

Dig deep and the occult feel of ‘Caveman Blues’, with its huge fuzzed up riff that grabs you by the sideburns. It’s a repetitive riff but it’s a goodie from start to finish. ‘Worship the Void’ cranks things up to 11, and you’ll feel the power of one of the album’s heaviest riffs that segues into a gentle, calm passage that ebbs and flows with a tranquil grace before meandering into a kaleidoscopic cosmos.

The band are a tight unit, the production grungy enough to retain a bit dirt under the fingernails, as can be seen on the spacey ‘Sky Ritual’ that closes this fantastically enchanting album with style. Perfectly placed on the Heavy Psych label, Warlung’s fourth release is one that is well worth a visit.