A forboding and tangible sense of unease grips you as the opening menacing strums of ‘Kuebiko' dolls out a dark and striking warning. The opener to ‘Arms to the Sky' the EP from Oldblood simply side swipes you leaving you helpless as a riff so devastatingly monstrous takes full control and punishingly propels the blackened doom forlornly onwards. The shimmering guitar hints at a possible lightness and makes for a subtle dynamic which allows the opener to stay on the right side of not becoming overbearing with its sonic assault of the senses.

An ominous presence has been created. Atmosphere and feeling are hard to execute, or at least convey, within such brutally powerful music yet this is a string to the Oldblood bow which remains throughout ‘Arms to the Sky'. Clever, deft subtle nuances within the songs enhance this focus on atmosphere . A sense of utter anguish is evoked as a bluesy riff bounces and pulses in ‘Nuclear Blues'. Through the relentless battery of blast beats there is a definite black metal feel but equally a slight change in tone with the buzzsaw tinged almost D Beat style increasing the intensity. Yet in tandem and working seamlessly with the harrowed, icy sections are a very definite post rock feel. Layers are built slowly and considered adding so much depth to the track. With the deep guttaral howls trading hefty blows with the sharper, more direct shouts a degree of tension is produced and adds further to the bruising, snarling nature of the song. ‘Lost Alamos’ further sees the Londoners intention to not be shackled by the confines of sludge and stoner doom. A jabbing, hypnotic riff comes through after a reflective ambient start. To say there are delicate moments would be a stretch but the quieter, softer guitar flourishes do hold an air of space, brightness and are a clever foil to the bludgeoning wall of noise. 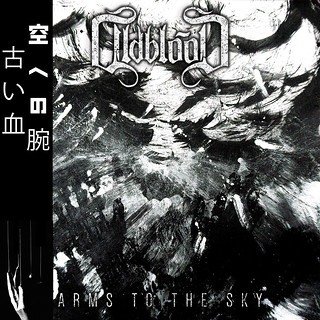 Based around the dropping of the atomic bomb on Hiroshima and the repercussions, to say ‘Arms to the Sky’ captures the essence of this dark period in modern history would be to trivialise it yet what Oldblood do adeptly and respectfully is create a dramatic and chilling soundtrack to the horrific events that form the main theme of this EP.

From start to finish you’ve been twisted and pulled as the enveloping nature of the doomy sludge impacts on you. Closing track, ‘Alone' has a grandiose feel without losing its visceral clout. Sprawling, pulsing guitar and a double pronged vocal attack again enhance the tension. Layers are created and the depth expanded as this richly dark journey nears its end. Disturbing feedback and white noise finally see this tale of ‘She' a person who stands amongst the devastation post bombing and has lost everything, come to its unsettling climax.

Quite how Oldblood create and retain such tension through the extremity is anyone’s guess, yet they do. The man with the midas touch it seems, producer Joe Clayton must be complimented for allowing the songs to come to life and not  merely be a collection of bruising standalone cuts but an inclusive and flowing EP. The ease with which Oldblood mix the key elements of Black metal, doom, stoner and post rock is effortless. Never does this coming together feel contrived or trivial. Oldblood’s ability to produce a level of feeling, emotion and tension not normally associated within this music is testament to their craft. ‘Arms to the sky’ can be as immersive and intimate for the listener yet in contrast will astound with its the sheer visceral power. It may be left very late in the year but ‘Arms to the Sky' is a must for those seeking not only a masterclass of sludge infused doom but also the richer, deeper and more emotive gifts Oldblood scatter throughout this enthralling release.