In a year which has seen stellar releases from some of Hardcore’s heavyweights and a host of lower-profile bands delivering huge contributions to keeping the flame burning, this four-track EP from the LA wrecking crew feels like Terror’s hold-my-beer moment. 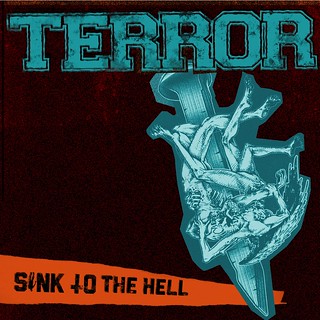 Clocking in a less then ten minutes Terror waste no time in demonstrating their style and have used this record to show what they are all about. Each of the tracks shows a different side of the band, whether that is the huge, measured punches and devastatingly heavy sound of the title track or the frenzied chaos of future pit-stomper, Don’t Need Your Time.

Terror are such seasoned veterans of their craft that the seeming effortlessness of the hook-laden A New Beginning is parr for the course. More infectious than Covid and with an unrelenting groove that damn-near puts a gun to your head and forces up to two-step the night away.

Final track, You Lost All Respect, is an amalgam of what has gone before: a blend of the measured and the frenzied, the chaotic and the catchy. It’s mid-paced, hook-infused and as unrelentingly heavy as you would wish.

The production on Sink to the Hell is crystal clear, with the guitars sounding massive and the drums delivering devastation with every hit of stick on skin. All the elements are here to make this unexpected Hardcore release a must for any fan of heavy music and a reminder to all those up and comers that there’s still plenty of life in the old-dogs yet.