When you think of Scandinavian Black Metal you tend to conjure frozen forests filled with shirtless ghouls or immolated churches, ablaze against the northern sky. Both Norway and Sweden’s place in the pantheon of The Dark Arts is assured, but neighbours Finland always appear to have lagged behind somewhat. The Finns have the snow and the forest, and they even have Lapland, the home of Santa (an anagram of Satan), but they didn’t ever seem to push through in the way their closest allies did.

The likes of Beherit, Horna and Impaled Nazarene have led the Finnish charge, keeping the flame burning, so now it is the time for reinforcements to arrive. Luckily, Valravn are here with their debut album, Prey, and the four Finns do not sound in the mood to take prisoners. 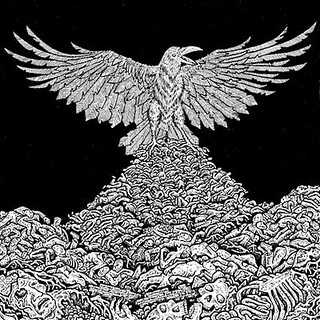 Blending aspects of both a Norwegian and Swedish sound, while infusing their music with interludes of acoustic calm, Valravn have crafted a very competent Black Metal album indeed. Bookended with the use of acoustics, evoking sitting beside a roaring fire as shadows dance against the wall, you are drawn into the atmosphere of Prey. Awaken’s medieval feel is momentarily complimented by an electric guitar, bringing the anachronistic music into the twenty-first century.

Rather than merge the stylings of Norway and Sweden, the Finns adopt a particular sound for each of the tracks on Prey. Throne of Blood, Evoke the Fire and Treachery are straight out of the Dark Funeral playbook: raging guitar above blast-beat drumming and showing how the influence of Swedish Death Metal has permeated much of that nation’s Black Metal sound.

Illustratum switches the Swedish influence up a little and turns to a more Marduk/ Watain sensibility. A dirtier, more traditional sound, using acoustics again to supplement the atmosphere and overlaying demonic growling vocals.

Sitting amid these tracks like spies, Valravn turn to their Norwegian neighbours for Void and Conjuration. Both are infused with catchy hooks utterly at odds with the frenzied, inhuman screams and rasping, evil voice. Where the former uses blast beat drumming, the latter is slower, almost accessible, as the music layers itself hypnotically atop repetitive passes. But for all its seemingly approachable nature, Conjuration is eying you with infernal intent.

Can’t help but admit I was just a little bit disappointed The Raven wasn’t a cover of The Stranglers’ song, but any reservation was swiftly set aside by what is surely the most accomplished track on Prey. An amalgam of all that has gone before, The Raven’s olde worlde beginning gives way to modern instrumentation, Hellbent on one final destructive rampage. Mayhem-like rasps spat over fiery, evil guitar and blast beats create the Blackest of Metals and leave the listener in no doubt that the demonic close at hand.

Valravn are not reinventing the wheel with Prey, but why should they? Instead they have created a debut album that signals them as ones to watch in the coming years.