Despite forming twenty years ago, Oale Groond is the debut album from Dutch black metal duo Sagenland. The band formed in the Twente region in 2001 and is made up Floris Velthuis on bass, drums and vocals and Arjan on guitars and vocals. Arjan is also the owner of Heidens Hart Records through who this album is released. 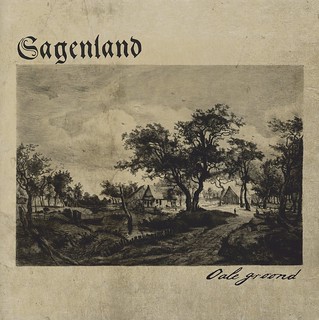 Sagenland have only one prior release to their name which is a split with Vargulf that was released in 2005 and the three songs of theirs included on that split release also find their way onto Oale Groond as well as seven brand new compositions. The sound that Sagenland have is one very much influenced by folk with plenty of folk-led acoustic interludes throughout the album as well as distinctive folk melodies mixed in with the black metal ferocity. The folk elements don’t dominate though just like the melodic elements aren’t dominating nor the trve black metal elements. Each aspect of the Sagenland sound is given ample breathing space and amalgamated together to produce an album that is a very enjoyable listen. The guitar work is commendable with gnarly black metal riffs mixed with very slick folky acoustic work. The drumming is also very aggressive but fairly solid but there is some very tasty bass guitar work throughout the album. It is a merit that the bass is clearly audible on a black metal release but not only is it audible but there are some very interesting bass lines going on which don’t simply follow the pattern of the guitar riffs. This is a very welcome thing on a black metal album.

Oale Groond is a very enjoyable debut album from Sagenland. It is a fairly short album with only 32-33 minutes of duration. There are some very enjoyable tracks throughout with the duo of De jammerklachten van Singraven – eerste deel and De jammerklachten van Singraven – tweede deel being very ferocious in nature whilst tracks such as Botte bijlen and Bladval play more into the folky and melodic side with the inclusion of some chanted clean vocals. There are definite nods to the early work of bands such as Ulver and Satyricon but Sagenland have their own merits and a very fine debut album.