‘Aberration’ contains three songs that follow each other in seamless fashion. A record unlikely to be to the tastes of many, it’s a short blast from the depths. Demonic, atmospheric death metal delivered with a hammer blow to the cranium. 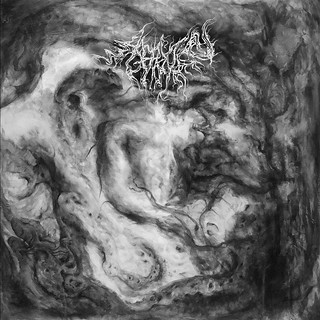 The tracks are entitled ‘I’, ‘II’ and ‘III’. Opening track ‘I’ bludgeons and levels, aided or hampered (you decide) by a bestial production, which blurs some of the edges. It’s rare for the tremolo riffing to rise above the sheer maelstrom that rages. It’s a track to wake the dead. Whether you intended to or not. The tempo doesn’t change for the following two tracks either. The pace is frenetic, the guttural vocals low in the mix, lyrics unintelligible but the brooding malevolence unavoidable. This will sate the appetite of the extreme, tempt some on the fringes and terrify those with milder palettes.

Aberration formed in late 2019, drawing members from Void Rot, Suffering Hour, Nothingness and Tvaer. Bands that revel in the darkness, a combination of death, doom and black metal that is laced with ambient drone. It’s the soundtrack to terror, a suffocating nightmare from which you will wake clawing at the walls. As you stumble from those chilling dreams, you’ll either retreat to safety or like the addict, return for another 14 minutes of abuse. I can’t recommend either. You’ll have to decide for yourself. Let’s just say, that this is probably not for the children to explore. You have been warned.