After the absolute shit show of the past 12 months I’ve been hoping that 2021 would offer us some pissed off music and that wish has most definitely been granted with the self-titled album from Spanish thrashers Angelus Apatrida. Forming in 2000 Angelus Apatrida have been thrashing away since with this self-titled album being the seventh from the band and it’s an absolute rager. 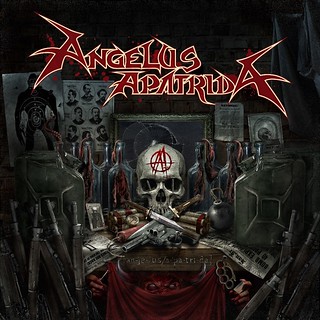 I’m a bit of a thrash aficionado but Angelus Apatrida tick all the boxes here. This album is fast, violent, aggressive, catchy and fun which to me are the key components of a good thrash album. The band definitely lean to the more aggressive side of thrash with healthy doses of both the old school Bay Area and German sounds. They work in a certain degree of melody as well, both in the music and in the vocals with frontman Guillermo Izquierdo having both a ferocious thrash snarl and a melodic sensibility in some of the bands catchier moments. The guitar work from Guillermo and David G. Álvarez is on fire with savage riffs coming at you left, right and centre and some absolutely sublime lead guitar work which can be equally melodic and an absolute shredfest. The rhythm section of both bassist José J. Izquierdo and drummer Victor Valera is a fine tuned machine of pounding brutality and technicality. And then we come onto the songs themselves with several bangers throughout the album. Opener 'Indoctrinate' goes straight for the jugular from the start whilst you have the chaos and catchiness of 'Rise Or Fall and We Stand Alone', the groove metal leanings of 'Bleed The Crown' and 'Disposable Liberty' and the moshpit ready 'Empire Of Shame'.

Angelus Apatrida seriously impressed me with their previous album 'Cabaret de la Guillotine' in 2018 and if anything they have built off that album and unleashed an even tighter album. This is an album that bursts with energy and should have any self respecting thrasher desperate to get into the pit. There was a lot of excellent thrash metal in 2020 and Angelus Apatrida give us a hopeful indication that this could continue into 2021. Thrash till death!

In case you missed it, check out our interview with Guillermo here.