Let’s get the elephant in the room out of the way straight away. Yes, Tortured Demon are a young band. An average age of 15 means that if the current chaos that has engulfed the UK is anything to go by, they may just be able to legally buy a drink by the time they are able to play a live gig again. If that is the case, then I’ll be pleased as punch to buy these three Mancunians that beer because this album has ample promise.

‘In Desperation’s Grip’ contains 44 minutes of thrashcore which wears Trivium, Machine Head, Slipknot and Sepultura proudly on the cut-offs. Soaking up those influences is one thing, stamping your own identity is something else and as the album develops, Tortured Demon edge damn close to achieving that.

Sticking tightly to the time-honoured tradition of a classical intro, piano and strings build the atmosphere before the title track explodes into life. It’s a hugely confident start. Halfway through the tempo changes as the band move to a slower, thicker riff driven chug which cries out for a circle pit. Vocalist Jacob Parkinson’s vocals are controlled, the band are tight but ‘In Desperation’s Grip’ cries out for a searing solo to elevate it higher. 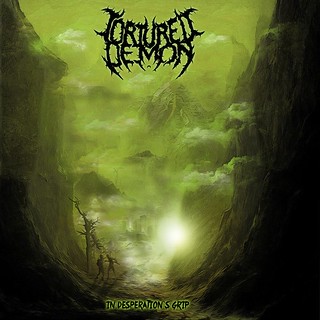 ‘Cold Blood’ takes a different approach, flooded with groove and a driving bass and drums that echoes Machine Head in many ways. The clean harmonies on the chorus provide a welcome change to the more strained delivery, whilst the band are not afraid to swop tempos and change pace. Once again, the absence of a solo is noticeable but like the over-hyped antipodeans Alien Weaponry, this is all about raw in your face riffs rather than virtuoso playing.

‘A Knee to The Face of Corruption’ is already familiar to many, having been released a few weeks ago. It’s a brutish track, all Trivium and Sylosis in flavour, but with enough cojones to stand alone. The energy and aggression alone make it a worthy song. ‘The Invasion’ is next, one of two songs that pass the six-minute mark and there’s some real head banging opportunity here with a real thrash rhythm for the first couple of minutes, before slowing things down which leads to a blistering paced section with a feisty solo that then segues into a clever singalong opportunity. This may be my favourite track on the album, with multiple changes of tempo and style setting it apart from the more formatted trio that precede it.

Over the halfway mark and the question on my lips was whether Tortured Demon could maintain the interest. No such problems with the ‘Sufferers of the New Plague’, surely a reflection of 2020, although the clean vocals tremble slightly on the chorus. There’s more variation despite a reliance on blocks of repetitive riffing, whilst the fade will irritate some. A touch of Soulfly on the intro to ‘Usurper’, the first track that I found a challenge. The change of vocal styles doesn’t quite work, the spoken drawl fusing into guttural roars and then cleans cluttered. The track itself doesn’t hit with the same intensity as most, and it’s missing the driving oomph which grabs you by the throat.

‘Cut the Budget … Cut Your Throat’ starts as a head down thrasher, the slight pause midway possibly unnecessary but does provide opportunity to catch breath. It expands into a banging Motörhead mid-section before returning to an accelerating thrash conclusion. ‘Oppression’ continues in the same vein; a furious maelstrom of anger and you wonder if it may have been a minor error to sit it next to ‘Cut the Budget’. Still, there’s nothing to dislike about it, the by now trademark breakdowns heavier than a taxi full of elephants.

The album concludes with ‘My Terror’, a track that skips between sinister atmospherics and all out 100mph racing thrash before fading rather strangely. It’s a big song, full of drama. After a solid intro, and some all-out thrashing, the track slows abruptly, and I’m not sure if the pause in the middle part of the song works fully. It’s a very Machine Head style, shades of ‘Days Turn Blue to Grey’ linger in the mind, with the finale favouring a deliberately slower, more nuanced conclusion. But it’s different and having commented earlier that Tortured Demon have a certain style, then ‘My Terror’ does provide a brave alternative.

As I observed earlier, it may be inevitable that comparisons are made with Alien Weaponry but for me Tortured Demon share little in common with their antipodean peers. For a debut album, this is a superb effort. There is plenty of scope for improvement, but the sheer enthusiasm, drive and talent on display all suggest that with the right guidance, the metal world will soon know who Jacob Parkinson, Freddie Meaden and Joe Parkinson are.