The January snows covering the grounds at Barnes Towers seem the perfect backdrop against which to listen to the ice-cold funeral doom of Mourners’ debut record. Formed from remnants of Eyes of Solitude, these Romanians know exactly how to wring the last vestiges of sorrow from their instruments and paint pictures of abject melancholy.

For this exploration of gloom, Mourners have created five lengthy pieces of crushing funeral doom, specifically designed to drag their listeners down into dense pits of despair. Throughout, the album is filled with an uncompromising intensity, manifest in deep growls and glacial minutes-per-beat tempos. The devastating weight of The Way of Darkness and Soul Breathing Nothing pummel the listener into a morose stupor, the power of which gives rise to the feeling that the walls of reality are about to collapse in. 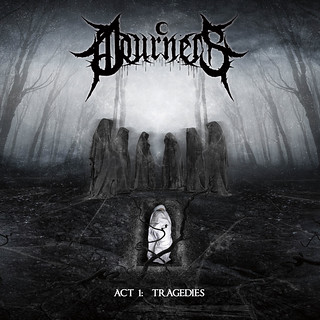 Whereas the former of the tracks is a distinct essay on the nature of solitude and misery, the latter does contain the glimmer of hope in the form of a guitar that is able to twist and turn and somehow shed a faint light on Mourner’s world.

The ambient interlude, Lost, acts as a bridge to the second part of the album in which the gothic elements, present but suppressed before, are now able to break through and reveal themselves. In this Mourners able to show their more cultured side as they introduce a Doom-Death flavour to the work. Yet, although Forms of Delusion uses strings and slows things down even further, the twisting guitar parts signify the possibility of a happier conclusion.

For me, however, the highlight of Act I: Tragedies is Ansu Enthroned. It’s not the longest track on the record but, in my eyes, it showcases everything that is great about this type of melancholic music in general and Mourners in particular. It moves effortlessly through moods with one moment being unnerved by the strange, dissonant note from a piano line to soaring on the liberating wings of a heart-breaking guitar solo. The beauty of this melancholy is both symphonic yet soul-crushing.

As a debut album Mourners have created a platter full of frozen intensity and gothic grandeur. I very much look forward to hearing Act II.