Like your music down right dirty? Like it fast paced and in your face? Like a band who push the boundaries of your comfort zone? Then look no further than Wasted Death, who are about to release the epic E.P. ‘Ugly as Hell’ via APF Records. 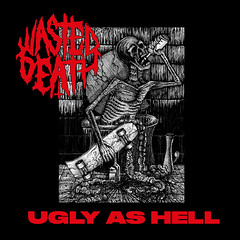 The band is the lockdown baby of Wayne Adams (Big Lad and Petbrick), Charlie Davis (Beggar) and Tom Brewins (USA Nails). An interesting combination of styles that has come up with the gutter punk / metal cross that is Wasted Death.

From the opening notes of ‘Thickened Skulls’ the bands mission is clear. The listener is greeted with an onslaught of punk aggression with a metal edge. ‘Spat Out’ is darker, it slows the pace, but only slightly, a grunge-esc bass-line leads you in, almost gives you reassurance before that snarling beast rears its head again. By the time the wonderfully titled ‘Bumfuck Nowhere’ starts out the listener should be aware of where the band are taking this. Its Converge meets Soundgarden meets Dead Kennedys meets any host of metal bands.

This is a snarling fifteen minute romp into the mind of a band who take no prisoners. No matter where your genre allegiances lie, Wasted Death have something to offer. The albums aggression is its charm, its melding of styles its swagger. This short but sweet E.P. is must listen material!

'Ugly As Hell' is released via APF Records on April 9th.