Sisyphus, the debut album from The Medea Project was a dark, primal, and haunting release. I was delighted to interview the band for another publication, and Brett Minnie and Pauline Silver were a delight, contradicting their mournful and emotional music. The duo’s latest EP, Southern Echoes is something different and special, containing songs that were played at a live-in-the-studio set for the online event, Metal4Africa Summerfest ’21 in January of this year. 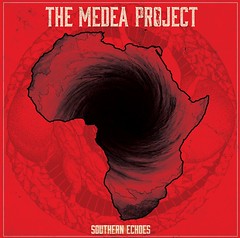 It opens with ‘Prelude’, a desolate and harrowing chunk of raw emotion, with Minnie’s soulful vocals echoing in a void of despair. Distorted guitar and thumping drums introduce ‘Babylon’, a fuzzed-up behemoth of a song that builds in atmosphere and intensity. They may have travelled far from home, but the South African roots of the band remain intact. This EP builds on ‘Sisyphus’, with the mysteries of their homeland woven through their music.

Whether it’s the jarring angularity of ‘Desert Song’, or the dark and foreboding ‘Fear’, complete with Silver’s crashing percussion, The Medea project bring a different style and sound which resonates deeply. For a two-piece, their sound is huge, and organic. The acoustic cover of Sol Invictus’ ‘Kneel To The Cross’ is not one that I was over familiar with but the track works well within the overall feel of the EP and also as a concluding piece.

There’s also a download link to an exclusive podcast, ‘Southern Echoes: Stories From The South African Underground’, which allows The Medea Project attempt to shed some light on the creative environment that first inspired them and changed their lives forever.

This isn’t going to be for everyone, but if you fancy something challenging and dark, then The Medea Project’s latest release should be worth a go.