With this second release in 2021, King Buffalo show that the pandemic may have damaged the touring process, but not the creative one. Earlier in the year King Buffalo released 'The Burden of Restlessness' to a cheer of critical acclaim. They could have rested upon this success but instead choose to release a second collection of work born from the covid lock down, with a third record to follow in 2022.

'Acheron' builds upon the sound of this Spring’s release with more of a fluid, spacey, vibe. If you are already familiar with their work this less angular soundscape will not feel totally alien to you; it still feels like King Buffalo, bit it does sound different to the 'Burden' album. The whole feel of the album seems more content and calm, even though 'Acheron' is named after the “Rver of Woe” in Greek mythology.

Obvious comparisons to early Pink Floyd can be reached but there is far more to this album than that. The opening title track is over ten minutes in length and embarks to show the this more tranquil atmospheric style from the outset. Sean McVay’s vocals float nicely around the subtle guitars and drum rhythms. The slightly more distorted, aggressive sound manifests itself later on in the track with triumphant effect. 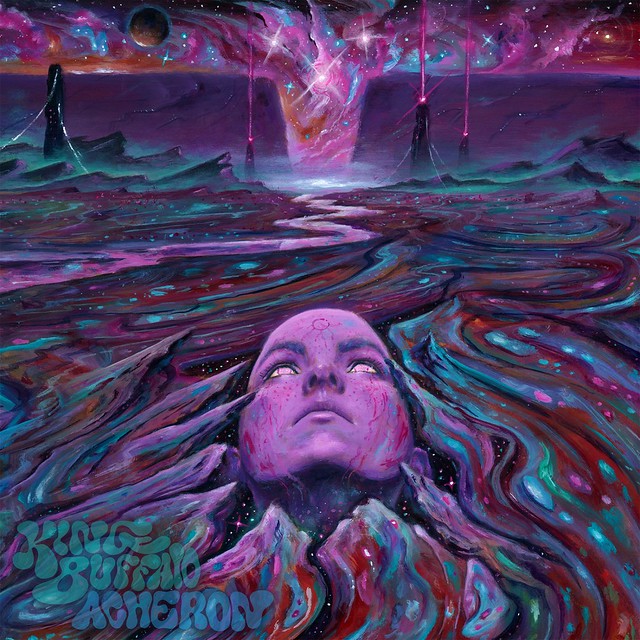 The band as a whole are musically very proficient and that musical skill bleeds through into the clever and interesting style of song writing.

The King Buffalo style is still very apparent though this release, thankfully, as they gained quite a few more fans with the last release, including myself. The second song contains the familiar repetitious riff with a glorious guitar solo, and the third builds more with the guitar solo, the sound both mellow and sublime. Scott Donaldson’s drums are precise and exacting, keeping the rhythm of the tune, along with bassist Dan Reynolds, building and holding a firm foundation. All musicians throw in flashes of brilliance while never showing off. The final number on this four track album perfectly continues this example of grace, beauty and song craft, in the same restful manner as before, giving way to a more sharp section once more that will feel warm to fans of this band.

King Buffalo have built upon a style and sound with another release that complements their earlier release perfectly. The guitar skills shine a little more, and the mood is softer but the enjoyment level is still very high.