Album Review: Fiddlehead - Between The Richness
Reviewed by Dan Barnes

Fiddlehead’s debut album, Springtime and Blind, was singer Pat Flynn’s rumination on the passing of his father; a catharsis of sorts, painted across a musical canvas for all to see. Released in the spring of 2018, it was considered that the band would be a one-shot deal as Flynn had dealt with the ghosts of his past and was able to move on.

But, as the book says: Just because you’re through with the past, it doesn’t mean the past is through with you, and the universe has decreed Flynn return to Fiddlehead to contextualise the changes in his life over the decade since his loss. 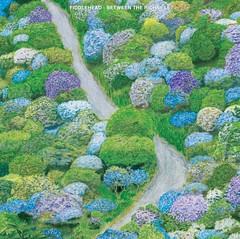 There are no huge musical statements to be heard on Between the Richness, no immediate hooks that you’ll find yourself whistling on your way down the street. Save for Get Your Mind Right and Life Notice there’s little in the way of heaviness to be heard at all across the record. But cacophonous sound-blasts is far from the point of Fiddlehead – with members of Have Heart and Basement within the ranks of the band, the personnel have their own individual outlets for their musical ire.

Instead, Fiddlehead exist in the realm of emotional post-hardcore. Opening track, Grief Motif is a sorrowful proclamation of loss, an easy guitar laying musical foundations as a vocal mantra repeats.

For the most part Between the Richness is made of clean guitar lines and tortured vocals. The Alt-riffs of Eternal You and Joyboy give those tracks a sunny and uplifting disposition, yet, as the former breaks down into an easy, almost laconic, part you are met with a spoken word passage about the nature of a friendship lost and the fears for the future.

Loverman is not a Nick Cave cover, rather a bass-heavy yet poppy track that is sure to become a favourite when we can spend our summer afternoons in a field with a few thousand friends; the bright and easy Million Times, with its big chorus, suggest that too is destined to be a festival staple.

In order to enhance the emotional impact of Between the Richness it is necessary to have some respite and that comes in the form of Down University – heavier-sounding with an immediate pop-punk section making it sound as though it could have been lifted from the American Pie soundtrack,

The album closes with the Gaslight Anthemic Heart to Heart, the most hook-laden song on the record and the one that delivers the biggest emotional impact as Flynn addresses his son as, himself, the son to a lost father.

Between the Richness is not the most immediate album I’ve ever heard and the lack of instant hooks might be off-putting to some. But this is a musical journey through human emotions and, complex machines that we are, it was never going be channelling the LA Hair-Metal vibe. Rather, Fiddlehead have delivered a mature and measured collection, a meditation on the nature of life and loss.