I’d like to think of myself as a silver-lining kind of a guy, so when I think of the ‘rona’s affect on the music business, I don’t lament the lost gigs (I actually do, I just can’t see the benefits in dwelling on the loss) rather I considered the extra time young bands have had to craft their debut albums into something of note.

I have been particularly blessed by having had magnificent debuts from the likes of Cruelty, Capra and Pupil Slicer to review of late; and can now add Culling Culture, Vexed’s first full-length to that list. 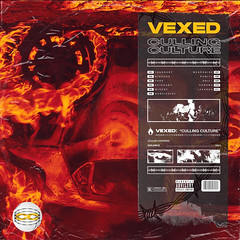 From the very beginning of Ignorant to the closing of Lazarus, Vexed commit a sustained modern metal assault that is both breath-taking in its scope and wildly infectious. Borrowing from the Modus Operandi of Swedish purveyors of insanity, Meshuggah, Culling Culture locks in a polyrhythmic approach of air-tight drum and bass and a guitar alternately cranking out dissonant chord structures or taking flight on wings of fancy.

Nestled among those angular chord structures hides the occasional groove and beatdown alongside a distinctly Nu feel to tracks like Fake and Narcissist, with its early Slipknot use of frantic bends and killer, stabbing riffs.

Vocalist Megan Targett gives a tour-de-force performance across the whole of the record. From the guttural growls of Misery’s beginning, where she sounds merely seconds away from inflicting some serious throat damage on herself, to the combination of growls and clean vocals the like of a myriad of FFGM releases from the middle of the noughties.

Hideous, Epiphany and Purity all see Megan blending her vocal style – one minute singing you to sleep, the next producing something from a nightmare. Yet nothing can quite prepare you for the delivery of Aurora, an epic of scope, of disjointed riffs and of a haunting vocal performance that is simultaneously machine-gun fast and emotionally fragile.

Culling Culture is a remarkably mature album from a band so early in their career and one can only wonder what will happen when they are able to hone their craft in the live environment.