Having only formed in 2020, Scandinavian duo, Funeral Chasm, lost no time in releasing their debut EP, I, and a couple of subsequent tracks over the following few months. In that case – relatively speaking – Omniversal Existence is an age in the delivering; but arrives fully formed.

Comprising of Morten and Danny from Black Metal band, Above Ravens, Funeral Chasm leave the listener in no doubt that they are a serious contender. Omniversal Existence comfortably encompasses the breadth of the genre, as it ranges from the more accessible, Gothic-centric version of Doom-Death, right through to the hard, harsh delivery of Funeral Doom. 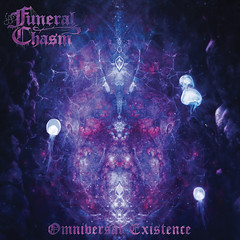 Beginning with a more Romantic rendering of the genre, Embellishment of Inception opens with a windswept landscape and a slow, dirging guitar. Here, as on Sunset Vertigo and The Skeleton Secret, Funeral Chasm steer toward the more Gothic version with surging musical motifs and a series of competing vocal styles.

One voice is low and guttural, another is raw and demonic while a third is soaring and ethereal; all the while, all emit a yearning and pain for something loss. The combination of these disparate voices gives the record a more melancholic feel, with the sorrows being multiplied and reiterated.

This lighter version of the genre allows Funeral Chasm to use aspects of psychedelia in the mid-section of The Skeleton Secret without it sounding out of place. Along with Progressive elements, which liberally pepper Omniversal Existence, the duo is able to make the heavier section all the more devastating.

When Omniversal Existence gets angry it does so in spades and the back-to-back hits of Mesmerising Clarity and Extracting the Flesh from the Gods veer into Funeral Doom territory through slow, deliberate, dark riffs and Hellish vocals. The sorrows here are legion, and tom rolls and cymbal hits punctuate the morose and utter despondent nature of the music.

Bridging the divide between Funeral Chasm’s extremes is The Truth that Never Was, which marries the Gothic with the Deathly and even manages to feature a cheeky Burzum nod into the mix.

Final track, Through the Eyes of the Joyless, sends Ominversal Existence out with a harsh, edgy composition. Featuring keyboards more prominently than anywhere else and the thickest, heaviest guitar on offer, the band close out their debut full-length with an uplifting climax.

Across the album you’ll hear influences from the likes of Fields of the Nephilim and Sisters of Mercy, through to Celtic Frost and Candlemass. All merge together to form a compelling record of depression and despair. Those who hear the genre as dour and miserable: well, that’s kinda the point; but, listen closely, and there’s rapture in the despond